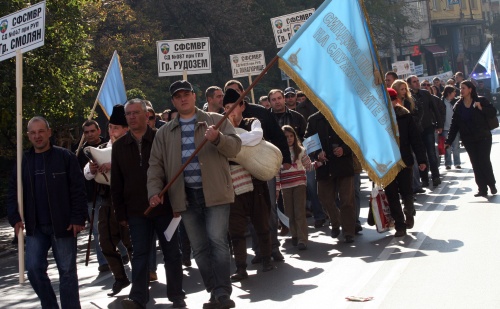 The police protest rally last Sunday was larger in numbers than the second one, but it is anticipated the one scheduled for November 7 would be joined by scores across the country and in neighboring Romania. Photo by Sofia Photo Agency.

The second in a row weekend protest rally of police employees, organized by their labor union, gathered about 150 demonstrators in downtown Sofia Sunday.

Even though the participants included policemen not only from Sofia, but from the cities of Blagoevgrad, Kardzhali, and Smoliyan, and the towns of Zlatarevo, Petrich, Madan, Rudozem, and Sandanski, they were much lower in numbers compared to last Sunday.

The demonstrators, however, vowed to continue protests with the largest rally planned for November 7, when in addition to attendees from across the country, it is expected it would be joined by colleagues in neighboring Romania.

The Sunday march starts from the Interior Ministry building in downtown Sofia to the Council of Ministries where participants will ask to deliver a letter to Prime Minister, Boyko Borisov.