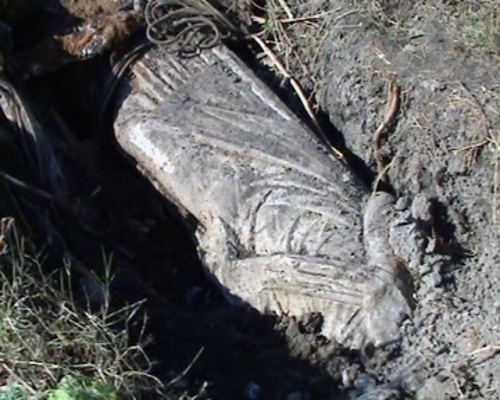 The 2-meter statue was found buried in the back yard of a village house on northern Bulgaria. Photo by BGNES

The 2-meter antique statue, which was found buried in the back yard of a Bulgarian village house belonging to illegal treasure hunters, is not of Aphrodite, as the police, who seized it, initially believed.

Petar Banov, archeology expert from the Regional History Museum in the northern city of Pleven told the Bulgarian National Radio, BNR, that the statue is a Roman tomb sculpture of an ordinary woman.

Banov pointed out the find has no signs and symbols around her legs and/or arms, designating the female figure as a goddess, adding it was made during the flourishing of the ancient Roman city of Ulpia Oescus on the Danube, close to the village of Gigen in the Pleven District.

Banov, however, explained the archeological value of the discovery is still very high because it is of great quality and craftsmanship and it would give historians precious information.

According to the expert, it would be very hard to make a monetary appraisal of the statute because Bulgaria does not have an official antiques market and auctions.