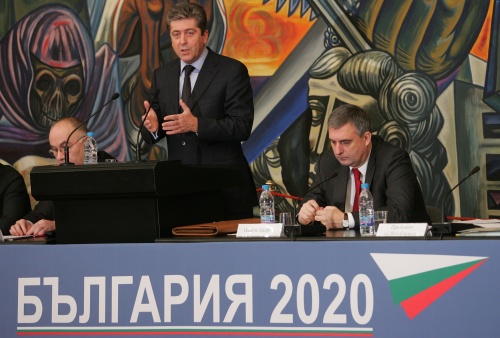 Bulgaria's President, Georgi Parvanov (L), with former Foreign Minister and now Member of the European Parliament, Ivaylo Kalfin, at the economy forum. Kalfin is the forum's moderator. Photo by BGNES

Bulgaria's President, Georgi Parvanov, is hosting Friday a discussion on the strategic economic priorities for Bulgaria titled "Strategic Priorities for the Bulgarian Economy within the Europe 2020 Strategy."

The forum is held at the National Palace of Culture in downtown Sofia.

In his key-note address, Parvanov said the current government of the center-right Citizens for European Development of Bulgaria (GERB) party has chosen the wrong direction; failed to deal successfully with the economic crisis and has taken Bulgaria further away from other EU Member States.

The President was adamant those ruling the country must look beyond the 2011 budget, adding there is a strong need to create a brand new anti-crisis program.

"We are all for political stability, but not the imitation of stability, applied by force. Stability is mostly the result of good policies. If we have good policies, we would not need to even think about stability," Parvanov said.

The President reminded that one year ago he insisted on the flexible use of fiscal instruments in order to have limited deficit, to encourage the business and the demand, and to carry out education and health reforms, adding his ideas were ignored, and the results are now a fact.

He further indirectly accused the cabinet of scheduling their meeting with the trade unions and the business at exact same time as the economy forum, but added he was ready to call another one anytime to help solve the country's problems.

The only representative of the GERB cabinet at the forum is the Deputy Economy Minister, Evgeni Angelov. Other participants include the Head of Bulgaria's Central Bank, Ivan Iskrov, former Finance Minister, Plamen Oresharski, economy expert, Georgi Angelov, and Hristina Hristova, ex Social Minister, and now leader of the of the National Movement for Prosperity and Stability (NMSP), the party of former Tsar and Prime Minister, Simeon Saxe-Coburg, among others.