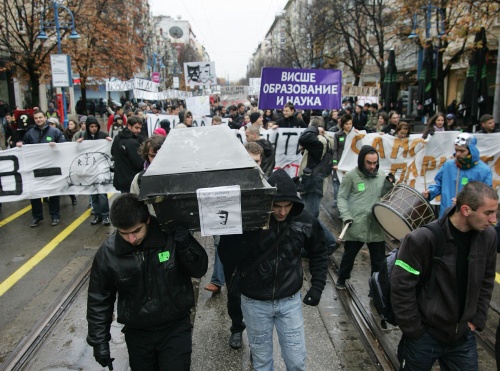 Students carrying the 'coffin' of Bulgarian education at Thrusday's rally in downtown Sofia. Photo by BGNES

Hundreds of university students came out to protest in Sofia Thursday against drastic reductions in state funding for education and research.

The students, from Sofia University and the three Academies of Fine Arts, Theater and Music, gathered under the slogan "We Want to Study!" and accused the GERB cabinet of ensuring the ruin of Bulgarian higher education.

They tabled a declaration to Bulgarian PM Boyko Borisov and to Parliament, reminding the ruling party that it is contradicting its pre-election pledge to have education as a top policy priority.

They demanded 0.8% of GDP for higher education against the 0.48% proposed by cabinet for state budget 2011, and requested that this figure grow gradually to reach 1.13%, which is the mid-EU level of state financing of colleges and universities.

Students also demanded a considerable upping of the state funds for research.

In response, Minister Simeon Djankov, who was present at an event at the University of National and World Economy (UNWE), chose do dismiss the protests, saying that the protesting universities were the ones that suffered from a systematic mismanagement of funds.

Earlier this week, PM Borisov and education minister Sergej Ignatov had given the promise for a marginal up in funding.

A fresh protest is planned by Sofia University for November 1, on which Bulgarians mark education day.