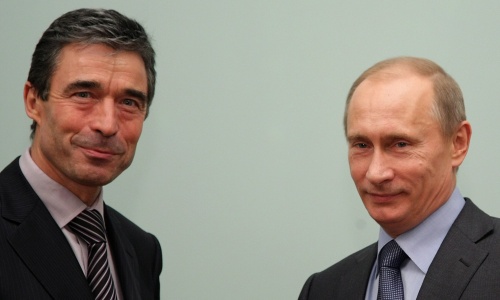 Bulgaria's Foreign Minister Mladenov has refuted reports of talks between NATO and Russia for imposing a ban on locating "substantial combat forces" in the new member states of the Alliance.

On Wednesday, the Russian newspaper Kommersant reported that NATO and Russia are holding talks for cooperation in which Russia is demanding that no "substantial combat forces" be stationed on the territories of the newer NATO members in Central and Eastern Europe such as Bulgaria.

"There are no such talks between anybody. The only thing going on is NATO's initiative under which Russia and the Alliance should work together for the setting up of a missile defense system in Europe," Bulgaria's Foreign Minister Nikolay Mladenov commented.

"The assessment that we see on part of our Russian friends is that there is a serious enough threat for everybody so that we should work together. Bulgaria solves its security problems within the NATO family, and of course we must work with all partners to the east and south of us. There is nothing that can make Bulgaria's NATO membership "second-rate" or limit the access of the Bulgarian state to guaranteeing its security within the collective polices of the Alliance," he explained.

Citing Russia's Deputy Foreign Minister Sergei Ryabkov, Kommersant reported earlier that Russia demanded guarantees from NATO with respect to the US missile shield in Europe, namely that no substantial forces be located in the Eastern European members; at the same time NATO wanted greater help from Moscow with respect to Afghanistan.

The Russian demand for a ban of placing large-scale military detachments in Eastern Europe is said to be contained in a draft cooperation agreement presented by Russian Foreign Minister Sergei Lavrov to NATO Secretary-General Anders Fogh Rasmussen.

"We would like to reach a situation in which the level of predictability of the military sphere actions in the countries that recently joined NATO is higher than it is at present," Ryabkov said.

Russia's Ambassador to NATO Dmitry Rogozin is quoted as saying that Russia wants a legal agreement for limiting the military forces in Eastern Europe but that the Alliance was skeptical largely because of the vagueness of the term "substantial forces".

An anonymous NATO source told Kommersant that Lavrov indeed offered such an agreement but that it was hard to say whether NATO would agree to it.

NATO Secretary-General Rasmussen is expected to visit Moscow before the NATO summit in Lisbon on November 19-20, 2010, where Russian President Medvedev is also expected to attend.