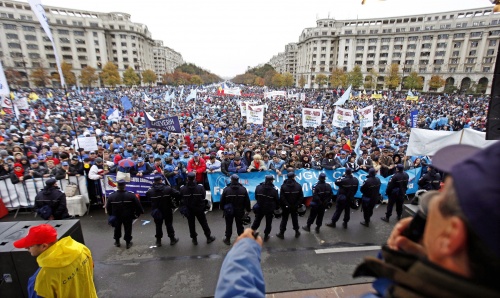 Tens of thousands of protesters clashed with riot police in Bucharest, rallying against the austerity measures of the government of Emil Boc, which nonetheless survived its fifth no confidence vote. EPA/BGNES

The motion was initiated by the coalition of the Social Democratic Party and the Conservative Party, and was backed by the National-Liberal Party.

A total of 218 MPs voted in favor of the no confidence motion, with 236 needs to pass it.

As the MPs were debating the vote, over 20 000 demonstrators rallied against the austerity measures of the government; according to labor unions, the protesters were about 80 000, including policemen, nurses, thermal plant workers, and civil servants.

As of July 2010, the Boc government introduced stringent austerity measures, cutting the salaries of state employees by 25%, and increasing the VAT from 19% to 24%.

Romania took an EUR 20 B billion loan from the IMF, the European Union and the World Bank last year when its economy shrank by 7.1%.