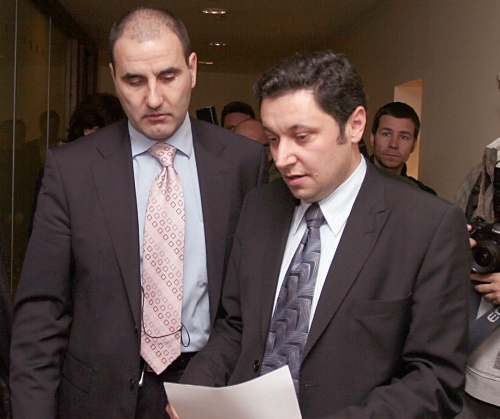 Tsvetan Tsvetanov (L) and Yane Yanev are shown conversing in 2008. Photo by BGNES

According to Yanev, firms close to Aleksei Petrov, the former secret agent of the Bulgarian State National Security Agency DANS who has been investigated for organized crime activities since February 201 and is nicknamed the Tractor or the Octopus, have financed Bulgaria's ruling political party GERB.

In his words, Tsvetan Tsvetanov, who chaired GERB in 2006-2009, while current Prime Minister Boyko Borisov, the party leader, was mayor of Sofia, tried to launder money with unknown origin through firms owned by the Lev Insurance Corporation, which is believed to be close to Petrov. After that the Lev Corporation was supposed to return the money in question to GERB as a donation.

In his first statements after he was released from jail, and into house arrest, Aleksei Petrov, who is believed to be connected with the RZS party, said that his firms sponsored the now ruling party GERB.

On Friday, however, Yane Yanev said the money in question did not belong to firms owned by Petrov, but that in fact Tsvetanov, the current Interior Minister and Deputy PM, tried to use these firms to legalize funds with unclear origin.

According to Yanev, a man named Asen Urmanov, who since the late 1990s worked in the firms of the Lev Insurance Corporation, and in 2005 became an environment expert at the Sofia Municipality, and was also an activist of the GERB party, was supposed to be the intermediary in the laundering scheme.

Urmanov is said to have documents with Tsvetanov's signature proving that Lev Corporation firms made donations to the GERB party in 2006-2008.

Yanev declared, however, that at the present moment Urmanov is hiding abroad because he and his family have been pressured and harassed recently.

Urmanov promised to come back to Bulgaria next week on the condition that he will be able to meet with the Chief Prosecutor or some other senior prosecutor to present the documentation that he keeps.

The leader of the RZS party said the party leadership will be escorting Urmanov from the airport in order to prevent anything from happening to him. He revealed that Urmanov's son was recently beaten with hammers in a disco – an incident that he thinks is related to the pressure against the family.

Yanev keeps accusing only the Interior Minister of violations, and states he believes Prime Minister Borisov, whose right hand Tsvetanov has been for years, is probably unaware of them.