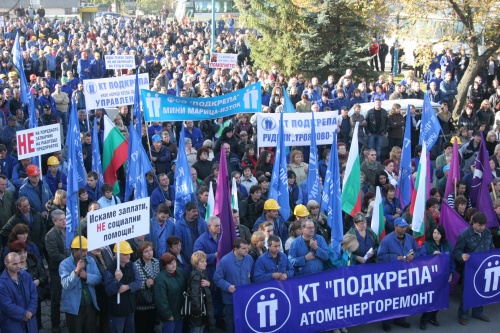 Over the past few days Brikel's workers have been protesting with demands that the government does not shut down the plant. Photo by BGNES

Bulgaria's government has agreed to cut energy tycoon Hristo Kovachki some slack by allowing his plant Brikel to keep working.

Despite the vigorous threats by Environment Minister Nona Karadzhova that Brikel, set up on 30 June 2000 by integrating "Briquette production plant" EAD and "Maritsa - East 1" Thermal Power Station EAD, will be shut down by the end of the month, talks with Kovachki and protests on part of locals and trade unions apparently made he re-think the Cabinet's position.

Brikel was supposed to be shut down because of its lack of sulfur filters and other environmental investments in the plant that it's leadership was first notified it had to make as early as 2004.

After talks between Kovachki, the ministries of environment and economy, and trade unions, the Cabinet has agreed to extend the operation of the plant by 6 months in order to provide central heating for the town of Galabovo over the winter.

Kovachki has agreed to assume all fines that might be imposed on Bulgaria by the European Commission if the Brikel plant continues work without the necessary environmental facilities.

As a result of the talks, the government agreed to called up a meeting of the 137 companies in the country with carbon dioxide quotas, in order to work out a compromise for allocating additional quotas to Brikel.

Economy Minister Traikov said that the state had made many compromises with respect to the plant; the government still has not asked it to pay BGN 30 M under the privatization contract if its carbon quotas expired.

In his words, the government must not treat Kovachki as a special case because this will raise protests on part of the other similar companies.

The talks are centered around finding ways to preserve the 1000-2000 jobs, which could be lost if Brikel closes down.