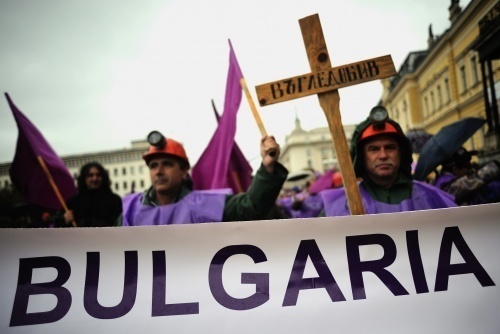 Supporters of Bulgarian Trade Unions shout slogans during a protest rally in Sofia October 7 against the cabinet's silence regarding intentions to increase the years of service required for retirement. Photo by EPA/BGNES

Bulgarian employers and trade unions rejected the bill for social insurance in 2011, which was reviewed Tuesday by the National Insurance Institute (NOI).

The announcement came from the Vice President of the Bulgarian Labor Union KNSB (Confederation of Independent Syndicates in Bulgaria), Nikolay Nenkov.

"We voted against because the bill included the proposal of the Labor Minister, Totyu Mladenov, who suggested that the period, in which workers from first and second category receive early pension from NOI, should be increased by one more year – until the end of 2011," Nenkov said.

On Monday, Mladenov stated that during this additional year, the government has to find the best solution for the problem.

"This is simply a flash in a pan. This option is worse than even the bill for amendments to the Social Security Code, which was pulled out from the parliament," Nenkov said.

He added that the employers were against the NOI bill because its text did not guarantee the execution of the conditions they stated, in order to agree on the increase of the pension insurance.

The bill is currently being reviewed by the National Council for Tripartite Cooperation.

The Head of the Bulgarian Chamber of Commerce and Industry, Tsvetan Simeonov, has announced that his organization did not support the proposal because its members do not agree with the increase of the insurance fee, as well as with Mladenov's proposal.

"It is about time for professional pension funds to start doing their job," Simeonov said.

He explained that employers will argue their position before the cabinet, which will have to "make its own decision about the NOI budget," in his words.

"There is no other way because there is no progress for three weeks already," Simeonov said.