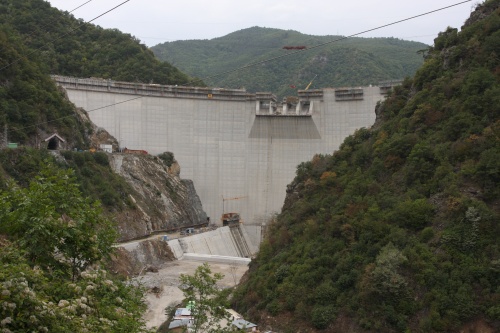 The 80-MW Tsankov Kamak hydro power plant will cost the Bulgarian state budget about half a billion euro. Photo by BGNES

Austrian company Alpine Bau has agreed to knock off EUR 10 M from the money owed to it by the Bulgarian government for the construction of the much problematic hydro power plant "Tsankov Kamak".

The hydro plant in the Rhodope Mountain near the southern town of Devin became notorious after Bulgarian Prime Minister Boyko Borisov visited the site in March 2010 and expressed his outrage at the fact that a 22-km road to the plant cost the state budget the staggering BGN 220 M. Borisov blamed the former governments, and most notably, the Socialists and the ethnic Turks for using the project to drain money from the state.

The outrage of the Borisov government at the situation that it uncovered with respect to state spending on Tsankov Kamak eventually culminated in an investigation and a suit against the leader of the ethnic Turkish party DPS (Movement for Rights and Freedoms) Ahmed Dogan for conflict of interest since Dogan, despite being a MP, was a consultant for Tsankov Kamak and three other similar projects, and received a fee of over BGN 1.5 M.

Interestingly, just as the Borisov government haggled with the Austrian construction company, a Bulgarian Court acquitted Dogan of the conflict of interest charges.

On Monday, Borisov made his second visit to the site of the hydro plant and met with representatives of Alpine Bau, together with Bulgarian Economy Minister Traicho Traikov and the head of the National Electric Company NEK Krasimir Parvanov.

With Monday's knockoff, the total cost of the Tsankov Kamak, an 80-MW hydro power plant, that Bulgaria is paying Alpine Bau is rounded at EUR 380 M. When the additional expenses of NEK (such as the problematically costly road mentioned above) are factored in, the total price of the project, which was started in 2004, reaches EUR 500 M.

NEK CEO Krasimir Parvanov has announced that the state-owned energy company is considering seeking a new loan to finance the payments it has to make to Alpine Bau for Tsankov Kamak because the Austrian company has threatened to file suits over some delays on its part. This is largely the reason the Bulgarian government started "political" negotiations with Alpine Bau over the price.

The notoriously expensive hydro power plant is still expected to be started by the end of the year although any revenue that will come from its operation will be insufficient to cover the costs for its construction at least in the years to come.

NEK has already gotten an EUR 160 M loan from Credit Suisse for Tsankov Kamak. Since it is said to have been overburdened with investment projects in the past few years, NEK is unable to finance its due payments to Alpine Bau, and has asked its principal, the Bulgarian Energy Holding, to start a tender for a new EUR 50 M loan.

Parvanov said NEK has already started preliminary talks for such a loan with Credit Suisse and Bank of Austria but the two banks are said to be "twisting the arms" of the Bulgarian state company by demanding huge interest rates.

The NEK CEO said that the company might avoid having to seek a loan to finance Tsankov Kamak if it manages to increase its allowed overdraft from the Bulgarian banks keeping its reserves, and receives up to EUR 250 M that it expects to get from exporting electricity to Turkey starting at the end of 2010.