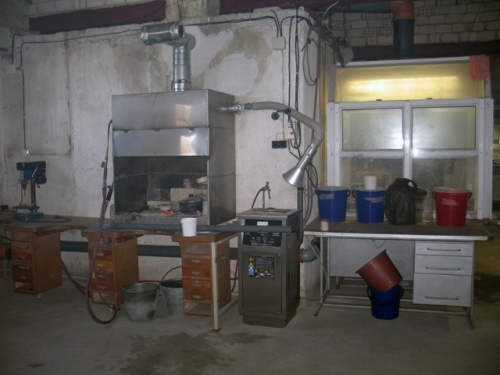 Pictured: some of the equipment used by the Founders to disguise gold and platinum as silver for exports. Photo by Interior Ministry

Brazen robbers have managed to steal more than 320 kg of gold which the Bulgarian police captured in August 2010 in one of its much advertised special operations.

The scandalous robbery was committed overnight as 320 kg of gold, 20 kg of silver, and 1 kg of platinum were stolen from a storage facility of the Bulgarian Customs Agency located at Terminal 1 of the Sofia International Airport.

"Unfortunately, for some reason, the automatic security system of the facility had been turned off. Our colleagues are on the crime scene and have started to search for the robbers," Bulgaria's Interior Minister Tsvetan Tsvetanov stated, as cited by the Bulgarian National Television.

The storage facility of the Customs Agency at Terminal 1 of the Sofia International Airport usually contains confiscated stolen or contraband goods such as liquor, cigarettes, or IT equipment.

The burglars broke into one of the storage halls, searched it, and then made a hole into a wall thus breaking into a second hall where they found the precious metals they were looking for.

According to BNT sources, the security system of the warehouse was turned off at 7 pm Sunday night, and the saves containing the gold, silver, and platinum had been left opened.

The burglars also managed to sprinkle hairs and alcohol on the crime scene in order to cover their traces.

The gold, silver, and platinum that have been stolen were confiscated in August 2010 by the police during a crackdown on an organized crime group dealing with illegal trade of precious metals. The much advertised police operation was codenamed "The Founders."

The Founders were busted as they were about to export a total of 369 kg of gold and platinum declared as silver through the Sofia International Airport.

Subsequently, the police found that much of the precious metals had been stolen.

Bulgaria’s Interior Minister Tsvetan Tsvetanov said the theft of the gold and silver will not affect the trial against the Founders as all evidence had already been gathered. It is still unclear whether those who committed the burglary have any connection with the actual five detained “Founders”.

As of late Monday night, the Customs Agency has failed to make any statements on the brazen burglary into its facility, which appears to have been facilitated from the inside, if the initial reports prove correct.