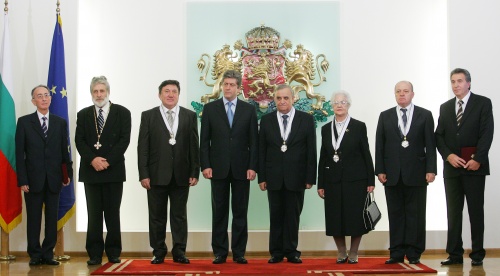 President Georgi Parvanov has awarded the Federation of Scientific-Engineering Unions in Bulgaria on the occasion of the 125th birthday of the organization.

Parvanov presented the Chair of the Federation of Scientific-Engineering Unions in Bulgaria (FNTS), Prof. Vasil Skurev, with an honorary sign for the contribution of the organization to the foundation of contemporary science in Bulgaria.

"The Bulgarian state is in much debt to the science sector in the country as far as the development of our research and development potential is concerned as a number of governments in the recent years have had a nihilistic attitude towards science. I believe in the future of your organization," President Parvanov stated.

The Federation of the Scientific-Engineering Unions in Bulgaria /FNTS/ is a non-government, non-political, creative professional non-profit association. Its members are national and territorial associations of engineers, economists, scientists, agricultural specialists, inventors, technicians, students and other specialists in the sphere of science, technique and economy. It has more than 15 000 individual members.

It was first founded on March 26, 1885, as the first Bulgarian technical association, which was instituted in the Danube city of Ruse.