Vietnam Thanks Bulgaria for University Graduates 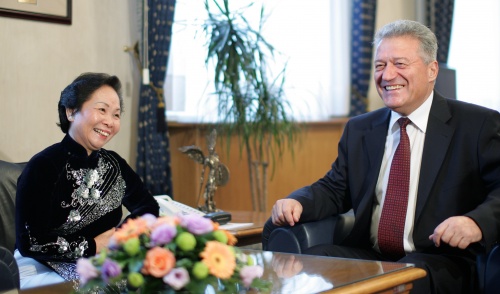 Vietnam's Vice President Nguyen Thi Doan has expressed her country's gratitude for Bulgaria during a state visit to Sofia.

Nguyen Thi Doan, who is herself a graduate of a Bulgarian university, has made it clear that Vietnam is thankful to Bulgaria for providing education to thousands of Vietnamese specialists.

The number of Vietnamese who received their degrees in Bulgaria is estimated at about 30 000. They attended Bulgarian universities back in the communist period when the Socialist Republic of Vietnam and the then People's Republic of Bulgaria were especially close.

Nguyen Thi Doan told both Bulgarian President Georgi Parvanov and Vice President Angel Marin in Sofia Monday that the thousands of Vietnamese with Bulgarian diplomas – including Vietnam's first Deputy Prime Minister Nguyen Sinh Hung, as well as several Deputy Ministers, university presidents, and renowned businesspeople – had a very positive impact on the development of the relations with Bulgaria.

She has pointed out that, even though the number of Vietnamese students in Bulgaria is smaller than it used to be in previous periods, the interest of Vietnamese in Bulgarian higher education is not fading away.

Bulgarian Vice President Marin welcomed Nguyen greeting her with the 60th anniversary since the establishment of diplomatic relations between Bulgaria and Vietnam.

"We are trying to turn Bulgaria's ties with Vietnam into a strategic relationship, much the way Vietnam has done with other European countries," Bulgaria's Vice President stated.

Marin praised the results of the visit to Bulgaria of Vietnam's first Deputy PM Nguyen Sinh Hung in July 2010, when the two countries signed agreements on diplomatic visas and economic cooperation and settled Vietnam's remaining debt to Bulgaria.

Nguyen Thi Doan will be meeting with the faculty of the University for National and World Economy in Sofia, and will be visiting another university city in Bulgaria, Veliko Tarnovo.

On Tuesday, October 19, she will open a Bulgarian-Vietnamese business forum hosted by the Bulgarian Chamber of Commerce and Industry (BCCI).

In 2008, as the Bulgarian economy was booming shortly before the global crisis hit, and the country started experiencing a shortage of workers, the authorities of Bulgaria and Vietnam started discussing the possibility of "importing" Vietnamese laborers.

As Bulgaria's unemployment subsequently soared to 9%-10%, this possibility has not been a matter of further discussion.