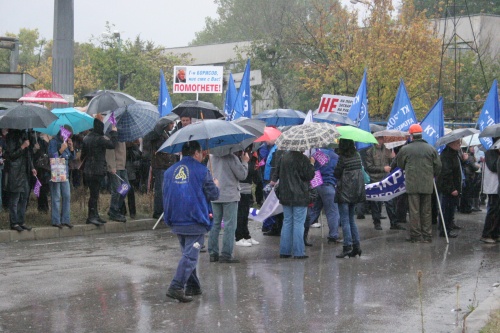 About 2,000 workers have gathered on the first day of the five-day peace protest against the shut down of Brikel Jsc, the largest briquette factory in the country. Photo by BGNES

About 2,000 Bulgarian workers from the major thermal power plant Brikel in the town of Galabovo have gathered on the first day of the five-day peace protest against the closing of the plant.

The protesters closed on Monday for 15 minutes the international road Ruse-Svelengrad.

In a declaration, the trade unions have pointed out that the closing of the thermal power plant and only briquette production plant in Bulgaria would leave 2,000 workers unemployed.

The protesters have also stated that the closing would have a negative effect on the residents of Galabovo, as well as on all social buildings, like hospitals, schools and kindergartens, because they would be left without heating.

The declaration has been sent to Bulgaria's PM Boyko Borisov, the regional governor of the city of Stara Zagora, Yordan Nikolov, and the mayor of Galabovo, Plamen Barakov.

Among the demands of the trade unions is the maintaining of employment in the enterprise by creating the necessary conditions for continuing the activities of Brikel.

The protesters believe that this could happen with the plant remaining in operation for 20 months, in which the necessary cleaning equipment could be installed.

The trade unions have also demanded the resignation of the Environment Minister, Nona Karadzhova.

The state has decided to stop the supply of coal "Mini Maritza-East" for Brikel from October 20. If the enterprise is not voluntarily closed, it would be closed compulsory.

Between 1,000 and 2,000 people will lose their jobs after the closing of the plant and the state will try to arrange a temporary employment for them.