Chavez Gets Cordial Nucleal Deal for Banana Jam in Moscow 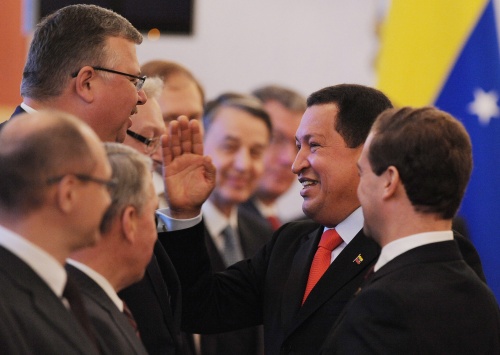 Russia and Venezuela have singed an agreement for the construction of the first nuclear power plant of the Latin American country.

The two states demonstrated extremely cordial relations during a visit of Venezuelan President Hugo Chavez in Moscow on Friday.

The agreement signed by the government of Venezuela and the Russian state company Rosatom – whose subsidiary Atomstroyexport is also supposed to build Bulgaria's second nuclear power plant at Belene – provides for two 1200 MW reactors.

According to Sergei Kiriyenko, head of the Russian nuclear company Rosatom, Venezuela's first power plant could go on stream in ten years' time at the latest, reported the Interfax agency.

"A nuclear power plant creates independence, particularly when oil prices plunge. Why should Venezuela, a country with whom we maintain especially good relations, not operate a nuclear power plant?" Russian President Dmitry Medvedev is quoted as saying.

Russia has recently completed Iran's first nuclear power plant, and has made deals for nuclear plants in China and Turkey, and considers such for India and the Czech Republic.

Russia also secured other energy deals with Venezuela, including the purchase of assets of Venezuela's oil company PDVSA by the Russian state company Rosneft worth USD 1.6 B.

Medvedev said Russia could invest big time in banana plantations in Venezuela, among other possible joint projects. The cordial tone was underscored by the fact that Chavez presented his Russian host with banana jam and chocolates from Venezuela.

The state leaders of Russia and Venezuela declared themselves in favor of a "new world order" in which the fate of the world would not depend on a single power – apparently referring to the United States.

Medvedev praised Chavez for his "principled" positions with respect to the independence of the two Russian-sponsored republics, former Georgian provinces South Ossetia and Abkhazia, which have been recognized only by Russia, Nicaragua, Venezuela, and Nauru.

Chavez's visit to Russia is part of a ten-day through Europe and Asia. In addition to Russia, he is to visit Belarus, the Ukraine, Iran, Syria and Portugal, with the possibility of a stop in China as well.