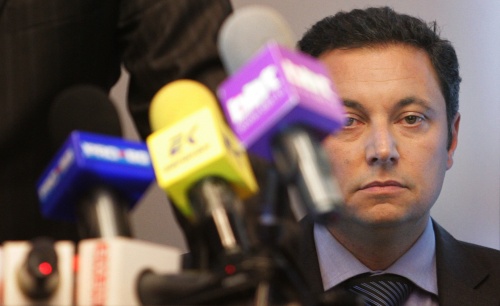 Bulgaria's Interior Minister Tsvetan Tsvetanov has established an organization of his own within the ruling center-right party GERB, according to Yane Yanev, chair of the conservative Order, Law, Justice party (RZS).

The leadership of RZS gave a special press conference Friday presenting allegations of a rift in the ruling party GERB, and of secret connections between Tsvetanov and the ethnic Turkish party DPS (Movement for Rights and Freedoms.

"RZS believes there are two power centers withing GERB, absolutely independent of one another, one belongs to Prime Minister Boyko Borisov, the other – to Tsvetan Tsvetanov. We believe that because of his political dependence on DPS Tsvetanov wants to create special courts in order to be able to open ground for economic expansion of certain interests," Yanev declared apparently referring to the project for special anti-mafia tribunal approved by the Parliament on Wednesday.

Yanev presented allegations that the ethnic Turkish party DPS presented 6 apartments to Interior Minister Tsvetanov. The conservative party claims that Tsvetanov has a total of 9 properties worth over BGN 1 M each.

"It is unclear how exactly Tsvetanov's family acquired these apartments since 2008. Documents that we have collected show that his family has no business so it is unclear how their income grew by BGN 565 000 in one year," Yanev said.

According to the RZS party, the state property register shows that a firm called TVB OOD, a conglomerate of a tourist agency and a construction company, headquartered in Dimitrovgrad transferred several properties to Tsvetanov.

Yanev said the head of the construction firm is Todor Boyadzhiev, who is an associate of Revin Atalay, the son of DPS politician Ramadan Atalay.

The leader of the RZS party said the relations between Prime Minister Borisov and Aleksei Petrov, the former undercover agent who is currently investigated as the "octopus" of the Bulgarian mafia, had a very old history, and would have a "very interesting ending."