Bulgaria, Russia to Set up South Stream JV by Nov 2010 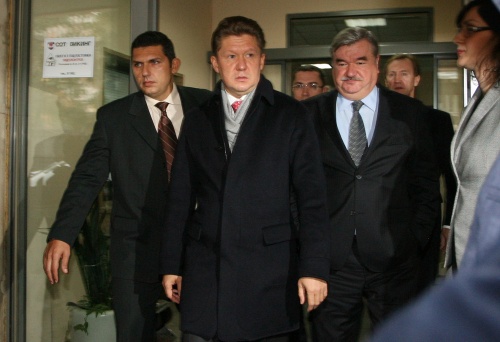 Alexei Miller (in the middle) said in Sofia that South Stream, which aims to bypass Ukraine in transporting Russian gas to Europe, will be put into operations in 2015 as scheduled. Photo by Sofia Photo Agency

Sofia and Moscow have agreed to establish a 50/50 joint venture by November this year for the building of the Bulgarian part of the Russian-led natural gas pipeline South Stream.

In his short statement to the media Miller stressed that talks with Sofia over the implementation of the project have marked a considerable progress and expressed confidence that South Stream, which aims to bypass Ukraine in transporting Russian gas to Europe, will be put into operations in 2015 as scheduled.

Earlier in the day Miller also held talks with Minister of Economy and Energy Traicho Traikov, during which the minister was expected to make a new attempt to cut gas prices and sign a direct gas supply contract with Gazprom. The minister however said the topic was not on the agenda of the meeting.

Minister Traikov negotiated a gas price reduction during his talks with Russian officials in July and forecast that prices for industry and households will be "a few percent lower", but this did not happen to be the case.

Gazprom CEO was also expected discuss delivery of Russian natural gas and the signing of a contract, which will imply no intermediaries in the deal.

According to energy experts Bulgaria needs to back its demands by pointing out the newly discovered local deposits of gas near Kavarna and the agreements for construction of gas network connections with Turkey and Greece.

In July Russia and Bulgaria signed a roadmap agreement on Saturday to speed up the building of the gas pipeline on the Bulgarian territory.

Bulgaria however has had an uncertain stance on South Stream, which has led to an activizing on the part of the Russian side. Just Monday Russian press characterized Buglaria as the "problematic" country for South Stream.

Jut a day before Miller's visit to Sofia the Russian energy giant practically renewed its threats to replace Bulgaria with Romania as the primary transit hub of the South Stream gas pipeline.

Bulgaria has been committed to the execution of the EU-sponsored Nabucco gas pipeline project, which is widely seen as rival to South Stream.

Imports account for nearly 70% of the energy Bulgaria uses and Gazprom provides almost all of its gas.

At their meeting on Saturday in St. Petersburg, Berlusconi and Putin welcomed the idea of having German companies join in as shareholders. There is no indication as to how the joining of RWE or some other German company would re-apportion the stakes.