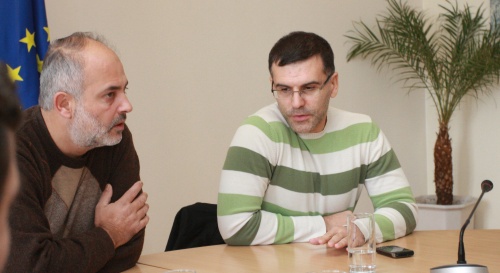 Djankov accused Mladenov in inconstancy and changing his mind on the reform under pressure from the labor unions.

The reason for the scandal is the Social Policy and Labor Minister agreeing on postponing the planned for 2011, increase of retirement age and required years of service to 2015, along with very gradual raises of both, postponing the reform even further.

Djankov is adamant the reform should not be left to the next cabinet's term and insists that the required years of service begin going up pay by one year annually on January 1, 2011, until they reach 37 years for women and 40 for men.

It is expected that Prime Minister, Boyko Borisov, who was busy Wednesday with the visit of Polish counterpart, Donald Tusk, would play peacemaker Thursday and call his two quarreling ministers.

The Three-Way Council between the business, the labor unions and the cabinet, which is at stalemate over the retirement reform and the amount of social security payments, is scheduled to meet Friday.

The meeting was initially set for Thursday, but was postponed on Djankov's request over the fact his experts are still calculating different versions of upping social security payments.

Mladenov is quoted saying he had not received any of the above said calculations while the labor unions threatened to not attend the meeting at all.