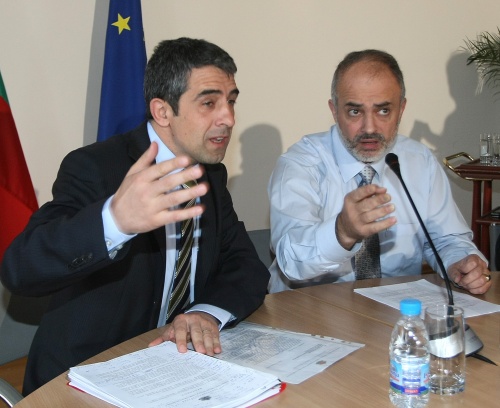 Ministers Plevneliev (left) and Mladenov (right) came together for measures against the gray economy. Photo by BGNES

Bulgaria's gray economy is worth about BGN 7 B per year, according to Regional Development Minister Rosen Plevneliev.

This is about 10-12% of Bulgaria's projected 2010 GDP, Plevneliev said during a surprise inspection of construction sites together with Labor Minister Totyu Mladenov.

About 25% of the Bulgarian gray economy is made up of the construction sector – or about BGN 1.7 B in absolute value.

"This means that the construction sector in itself must be a priority and major target for the state when it comes to combating the gray economy," Plevneliev said.

He revealed that Bulgaria's labor inspector checked 5000 construction site around the country in 2009 finding an average of four violations per site. One-third of the 20 000 violations have to do with labor contracts.

Going further in elaborating on the available government data, the Regional Development Minister said a total 200 000 construction workers were registered in the country in December 2009 but by September 2010, their number dropped down to 150 000.

Yet, of the 50 000 that were laid off, only 17 000 registered as unemployed, while the minister described the others as "labor pool" of the gray economy.

Labor Minister Mladenov in turn revealed that in the past four months the labor inspectors checked 3 140 sites, and found 15 000 violations, which led them to ban the work at 402 construction sites.

On Wednesday, Plevneliev and Mladenov inspected together two construction sites, one of which was temporarily shut down over blatant safety violations.