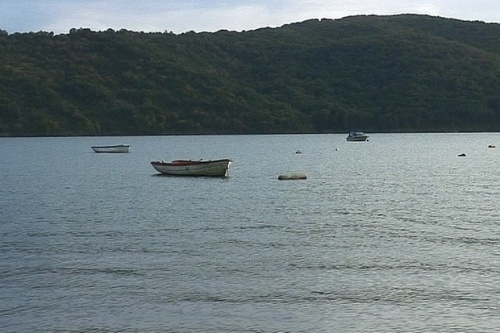 The picturesque Ivaylovgrad dam has become an attractive location for the construction of illegal luxury villas of businessmen and Customs agents. Photo by Sofia Photo Agency

Bulgaria's Regional Development Minister, Rosen Plevneliev, announced Wednesday the Head of the State Agency for National Construction Control, Ivan Simidchiev and the Head of the Svilengard Customs, Stefan Marashev, are being dismissed.

The discharges were made on the personal request of Prime Minister, Boyko Borisov, according to the cabinet's press center.

The decision came on the heels of the disclosure of pictures made last week by employees of the National Revenue Agency who flew in a helicopter over 45 properties, constructed illegally on State lands on the shore of the Ivaylovgrad dam in southern Bulgaria.

In the aftermath, owners rushed to legalize their sprawling real estate, which has been built over 10 years ago.

One of these villas that acquired legal status hours after the helicopter flew over belongs precisely to Marashev. The latter was already fired once, in 2008, from the post of Head of the Svilengrad Customs, but was reinstated by the Supreme Administrative Court.

Simidchiev will be fired over his long-time failure to undertake necessary and adequate measures for construction control, Plevneliev said, confirming there is evidence beyond legal doubt the 45 properties are illegal.

Over the last weekend Borisov declared the illegal villas would be either demolished, either seized by the State. The Regional Minister now explains the demolition could end up being a long process over legal procedures and appeals.

Bulgarian environmentalists have long insisted for Simidchiev to be fired over illegal construction in protected areas.

The vacation village Stavri Dimovo, on the banks of the Ivaylovgrad dam, is better known by its nickname – The Customs Agents Village over the luxury mansion properties belonging to people from Sofia and the southeastern border town of Svilengrad, who are mostly senior civil servants such as Customs agents, traffic cops as well as businessmen.