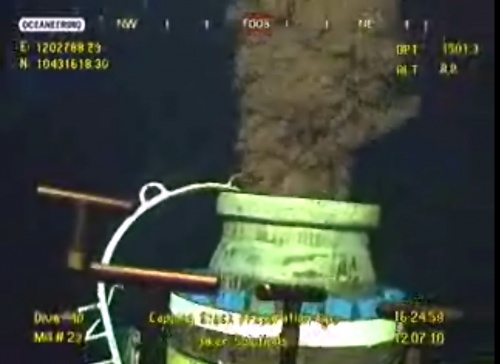 A rupture at a BP facility in the Gulf of Mexico in April caused the largest oil spill in history, raising global concern about the safety and responsibility of deepwater drilling. Image of the gushing well by EPA.

EU energy commissioner G?nther Oettinger will propose Wednesday a ban on new deepwater drilling in EU-waters in the wake of the Gulf of Mexico disaster.

The staunch measure, reported by Euractiv, follows up earlier comments by Oettinger to that effect in July and intends to stop all future permits for deepwater drilling until the results of the ongoing investigation of the reasons that caused the unprecedented spill in the Gulf of Mexico.

Representatives of the British government have already voiced dissent at this prospect, stating that they see no pressing grounds for such a measure.

Up to now, issuing of permits for oil drilling has been in the domain of member state and not EU-level decision.

If adopted by the European Commission, Oettinger's proposal will have to go through the approval of the European Parliament and separate member states. The Parliament has already rejected a prior non-binding motion calling for a moratorium on deepwater drilling.

The proposal also stresses the need for review of European safety regulations for the business of oil and gas extraction, and in particular to implement a "unequivocal liability regime."

The Bulgarian government is currently holding a bid for the deepwater exploration for oil off its southern Black Sea shore.

No underwater drilling has been this far performed in Bulgarian Black Sea waters. The EU has over 1000 drilling facilities in the North Sea and over 100 more in the Mediterranean.