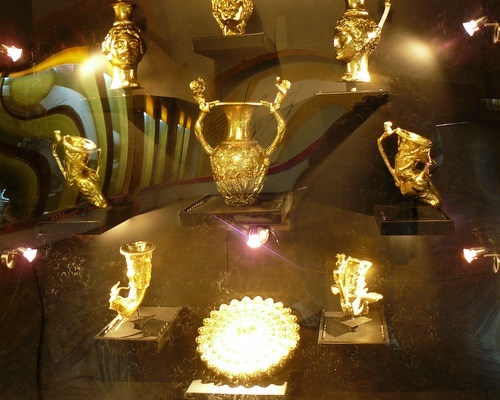 The municipal councilors from Bulgaria's Panagyurishte Town Hall declare they are outraged by the dispute between Sofia and Plovdiv about the country's most impressive archaeological gold treasure from Ancient Thrace.

The treasure, also known as the Panagyurishte Gold Treasure, is in Plovdiv to be placed on display in the city's Archaeological Museum. Its permanent place is the National History Museum on Sofia. The treasure was scheduled to return to the capital in two months and then travel to the US.

The Mayor of Plovdiv, Slavcho Atanasov, however, vowed to not let the central government take the treasure away from his city.

The Panagyurishte Town Hall declares the argument is preposterous, at least because of the name of the treasure and insists the debate comes to an end.

The town councilors will issue an official statement on October 12 when they will hold a ceremony dedicated to the Day of the Bulgaria Municipality.

"The Panagyurishte Gold Treasure has been considered a true symbol of our town for many years. One of the biggest pains of each resident of Panagyurishte is that this exquisite testimony for the genius of our predecessors has been far from our sight. But it is close to our hearts. The replica of the treasure, displayed in a modern exhibit hall, visited by hundreds each day, is proof for that," the declaration reads.

The Panagyurishte Town Hall asks that the treasure is on display in their town at least for one month each year, assuring they have all that is needed for its preservation and storage.

The councilors further insist the cabinet gives to the municipality 30% from all revenues from the treasure's displays around the world. They promise to put the money in a special fund to be used only for the study and the promotion of national history and traditions.

The nine unique gold artefacts, seven wine rhytons, an amphora and a food dish, have already been displayed in Paris, Basel, Switzerland, Brussels, Japan, and a number of other places around the world.

The artefacts reveal the virtuosity of ancient goldsmiths, who have reached the pinnacle of arts. The treasure is a witness to a particularly brilliant civilization and impress with their decorative richness.