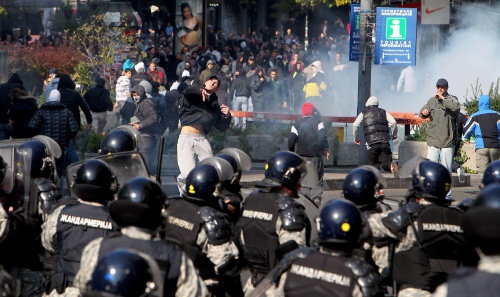 Serbian riot policemen clash with anti-gay protesters during the gay parade in Belgrade, Serbia, 10 October 2010. Prior, during and after the short march, hundreds of thugs with bricks, flares and bottles clashed with the police. Photo by EPA

At least 50 people have been injured as Serbian police clashed with protesters trying to disrupt a Gay Pride parade in the capital, Belgrade, BBC reported.

Police used tear gas against the rioters, who threw petrol bombs and stones at armed officers and tried to break through a security cordon.

A garage attached to the headquarters of the ruling Democratic Party was briefly set on fire, and at least one shot was fired at the building.

Most of the injured were reported to be police officers.

A number of people were arrested.

While the Gay Pride parade was moving though the city, several hundred protesters began chanting "The hunt has begun" and "Death to homosexuals."

Reports told of gangs of skinheads roaming the streets, throwing petrol bombs and setting off firecrackers as police battled to hold them back.

Thousands of police had sealed off central Belgrade to protect the event.

This was the first Gay Pride parade in Serbia since a march in 2001 was broken up in violent clashes provoked by far-right extremists.

A gay pride march planned last year was cancelled amid fears of violence.

On Saturday, several thousand people had protested against the march. Right-wing groups say that homosexuality is contrary to Serbian religious and family values.