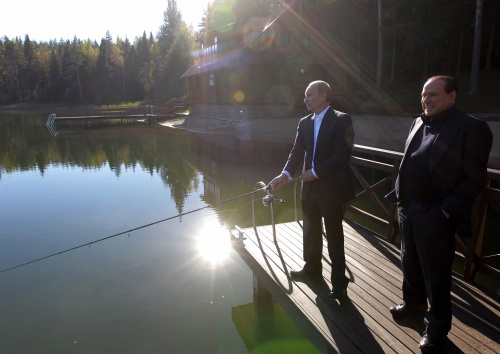 Russian Prime Minister Vladimir Putin (L) and his Italian counterpart Silvio Berlusconi (R) are fishing during their meeting at a residence outside St.Petersburg. EPA/BGNES

The Prime Ministers of Russia and Italy, Vladimir Putin and Silvio Berlusconi, have paved the way for German companies to join the South Stream gas transit pipeline.

Putin and Berlusconi met in St. Petersburg on Saturday, and the construction of the South Stream pipe was a major issue on their agenda.

Putin notified his Italian counterpart that German energy companies have expressed their desire to join South Stream as shareholders, and Berlusconi has received the news positively, RIA Novosti reported.

"As regards the participation of other parties, specifically a German company, I will be a very positive contribution. In this way, the interest of the European Union in the project will be strengthened," Berlusconi said.

"Excellent," Putin is quoted as replying to that.

"We will work on this project, he did not violate the plans of other companies implementing such projects in the region, other regions of the world, but this will certainly enhance energy opportunities and energy security in Europe", said Putin.

Over the summer, German media reported that Gazprom has approached German energy company RWE, one of the six shareholders in the rivaling gas pipeline project Nabucco, with an offer to join South Stream. However, these reports were quickly dismissed as being the result of a "misunderstanding."

Berlusconi said that joint efforts failed to convince Turkey that it should allow the passage of the South Stream through its territorial waters.

As early as April 2010, Russian Prime Minister Vladimir Putin announced that the French company EDF will also become a partner in the South Stream project. Back then he said that EDF asked for a 20% share, which, if granted, will probably leave Gazprom and Eni with 40% each. There is no indication as to how the joining of RWE or some other German company would re-apportion the stakes.