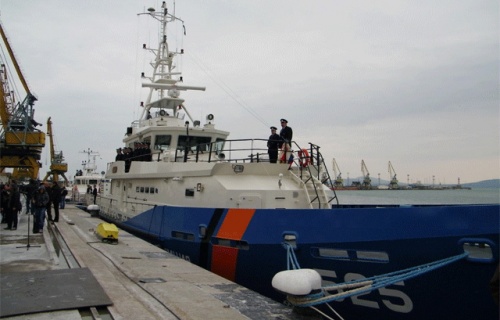 The largest of the new coast guard ships, the Obzor. Photo by BGNES

Bulgaria inaugurated five new coast guard patrol vessels to guard the Black Sea border to EU as a measure to meet the requirements for accession to the Schengen Agreement.

The new coast guard ships, which will be part of the Burgas Regional Border Police Directorate, were launched with a special christening ceremony Saturday in the presence of Prime Minister Borisov and Interior Minister Tsvetanov.

"We are going to do our best to be admitted to the Schengen Area in 2011. At the end of October we expected six new ships that will guarantee the border control along the Danube River," the PM said in Burgas.

"These five new ships will guarantee Bulgaria's commitment as an EU member state to protect the outside border of the Union. Thus, you will have the opportunity to work with the best possible equipment in order to be able to do your job professionally," Tsvetanov told the border policemen.

The new vessels were christened by Sliven Bishop Yoanikiy. They have been bought with EU money under the Schengen Facility, a mechanism to help new EU member-states to finance activities at the new external border of the EU in order to prepare for joining the Schengen Agreement.

The largest, 200-tonne coast guard ship was named the Obzor. The two 60-tonne ships were called the Shabla and the Kraymorie, while the two 20-tonne ships – the Emine and the Kaliakra.

They are to be used for monitoring and border control of Bulgaria's sovereignty over its Black Sea territorial waters and exclusive economic zone, and are equipped with top-notch navigation and communication systems. The ships are fit for long-term patrolling in the open sea, for detaining violators, and for working in inclement weather.

All five new ships have been included in Bulgaria's integrated system for the observation of the sea border, which is part of the European External Border Surveillance System (EUROSUR).

They will be taking part in operations of the Frontex Agency, the EU agency based in Warsaw, coordinating the operational cooperation between member states in the field of border security under the European Patrol Network project.

The three larger new ships were produced by the German shipbuilding yard Lurssen, while the two 20-tonne ones – by the Estonian "Baltic Workboats".