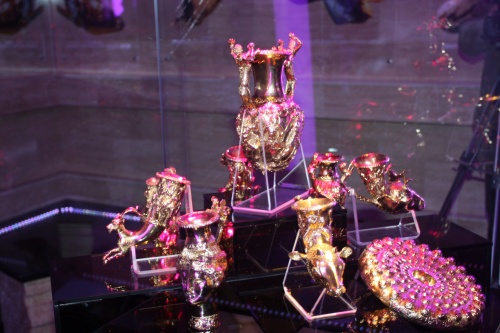 Bulgaria's top gold treasure should be displayed in the USA in 2 months. Photo by BGNES

A real war is on the way between the Mayor of Bulgaria's Plovdiv Slavcho Atanasov and the central government for the rights on the country's most impressive archaeological gold treasure from Ancient Thrace.

On Friday, under strict security measures, the Panagyurishte Gold Treasure arrived to be placed on display in the Plovdiv Archaeological Museum.

"That's it, now that it is in, we are not letting it go. We will guard it with human chains," vowed Atanasov who claims that the treasure found in the town of Panagyurishte, which is technically in the Plovdiv District, belongs to the Plovdiv Museum, and not to the National History Museum in Sofia.

Bozhidar Dimitrov, Bulgaria's current Diaspora Minister and former head of the National History Museum, has slammed the agreement between the national museum and the museum in Plovdiv, under which the people of Plovdiv should be able to enjoy the treasure for 2 months.

"I would never give the Panagyurishte Gold Treasure to a regional museum. It is Bulgaria's greatest asset as far as its cultural heritage is concerned," Dimitrov said.

The agreement, however, has been approved by Bulgaria's Culture Minister Vezhdi Rashidov, who is in charge of the museums.

"Who is the Minister of Culture – Bozhidar Dimitrov or I?" Rashidov has told the media, who also said that in two months the Panagyurishte Gold Treasure is going to be put on display in the USA.

Yet, Plovdiv Mayor Atanasov has sworn to never let the original treasure go out of Plovdiv, and offered to give the National History Museum its replicas that are kept in Plovdiv instead.

"I will refer Atanasov to the Prosecutor's Office if he hijacks the treasure," Culture Minister Rashidov declared on Saturday.

"He can refer me to whoever he wishes. I am protecting Plovdiv's interests. We have no right to prevent the treasure from going on displays abroad. But when it is in Bulgaria, it should be in Plovdiv," Atanasov told the Cross news agency.

He said the Panagyurishte Gold Treasure is formally part of the inventory of the Plovdiv Museum, and that the Plovdiv Museum's claims on it are further boosted by the fact that it has been receiving allowances from the state revenues from the treasure's displays abroad.

"The gold treasure was seized from Plovdiv in 1974 with the argument that our museum did not have sufficient security. Well, now with the improvements of the museum we have better security than the National History Museum in Sofia," the mayor said.

The treasure has not been shown in Plovdiv in 36 years during which it toured the world going as far away as Japan.

On December 8, 2009, Bulgaria marked 60 years since the discovery of its most famous archaeological treasure from Ancient Thrace – the so called Panagyurishte Gold Treasure.

The Panagyurishte Treasure was found on December 8, 1949, by three brothers – Pavel, Petko and Michail Deikovi, who worked together at the region of "Merul" tile factory near the town of Panagyurishte, Bulgaria.

It consists of a phial, an amphora and seven rhytons with total weight of 6.164 kg of 23-karat gold. All of the objects are richly and skilfully decorated with scenes from Thracian mythology, customs and life.

It is dated to the 4th-3rd centuries BC, and is thought to have been used as a royal ceremonial set by the Thracian king Seuthes III.

Plovdiv Mayor Slavcho Atanasov is from the nationalist party VMRO but was elected in 2007 largely with thanks to the backing of the now ruling center-right party GERB. Over the past few months he has been at odds with Prime Minister Borisov and the government over the depositing of household waste from the capital Sofia to the Tsalapitsa landfill near Plovdiv.