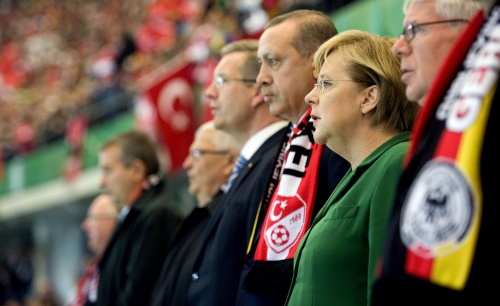 More than two-thirds of the Germany citizens are against Turkey's EU entry, according to a poll, whose results emerged as Turkish PM Erdogan met Chancellor Merkel in Berlin.

69% of the Germans do not want to see Turkey in the EU, according to a survey of Emnid Institute while only 27% back this idea, reported Die Welt.

Turkish Prime Minister Recep Tayyip Erdogan arrived Friday in Germany where together with Angela Merkel he watch the Germany vs. Turkey qualification match for Euro 2012 in Berlin, in the which the Germans won 3:0.

Erdogan and Merkel have held political talks on Saturday during which both called for the integration of the large Turkish community living in Germany.

"It's about participation in our society based on the foundations of our society. Assimilation is not at all on the agenda," Merkel said after meeting the Turkish PM.

Erdogan welcomed the statements by President Christian Wulff that Islam is now part of Germany as well as Christianity and Judaism.

"The EU must keep its promises. There can be no slowdown," Erdogan stated while asking Germany to advocate for the furthering of Turkey's EU accession negotiations.

Merkel in turn said the outcome of the accession talks was open but pointed out that at present they are stalled by the EU's insistance that Turkey open its ports and airports to ships and planes from Cyprus.

The Turkish accession negotiations with the EU began five years ago, but are proceeding very slowly. The Cyprus conflict and France's resistence against the inclusion of Turkey are major problems, Die Welt points out.

At the same time, however, nationalist formations raised hue and cry with the VMRO party pressing for referendum on Turkey's EU membership, while the Ataka party, which is Borisov's most important information coalition partner in Parliament, threatening to withdraw its support for the ruling party GERB over the declarations for backing Turkish EU membership.