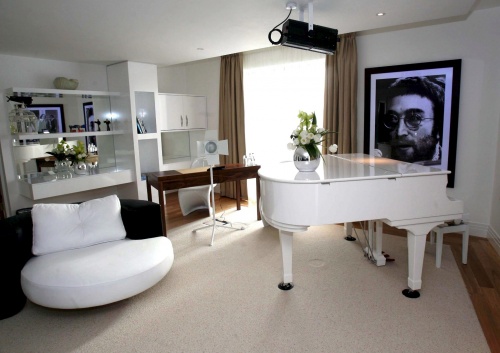 The John Lennon Suite of the Hard Days Night Hotel in Liverpool; the Beatles themed hotel has memorabilia from throughout the Beatles era. Photo by EPA/BGNES

Fans across the globe celebrate Saturday the birthday of music legend, John Lennon, founder of the Beatles and peace fighter.

On the occasion of Lennon's 70th birthday, his wife Yoko Ono got together with his record label EMI for the "Gimme Some Truth" campaign that is inspired by the "Imagine" album of the legend. Yoko Ono also released new compilations including the "John Lennon Signature Box."

Ono is giving Saturday the official start of the celebrations in Ireland with lighting the lights of the "Imagine Peace" memorial and performing in a concert with their son Sean.

In Lennon's native city of Liverpool, the musician's first wife Cynthia and son Julian will open a memorial dedicated to the musician and erected with funds raised by young peace activists. The monument is located near the "Beetles History Museum" in the city.

The documentary "Lennon NYC" will be shown in New York.

The "Mont Blanc" company is issuing a special commemorative pen, dedicated to John Lennon, and decorated with diamonds and sapphires. It will be sold for USD 27 000.

Lennon is one of the most influential musicians of all times and credited with changing music forever. Along with Paul McCartney, he is the author of the Beatles' biggest hits - "She Loves You", "I Want to Hold Your Hand", "Hard Day's Night". After the group split in 1970, Lennon created own songs such as "Imagine" and turned into a symbol of the movement against the Vietnam War.