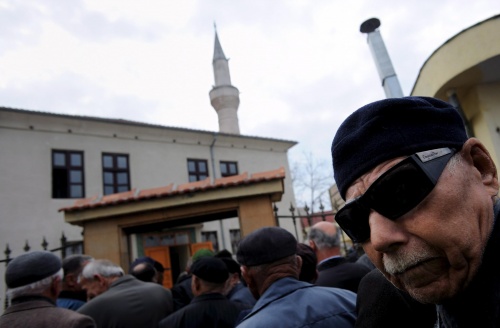 Bulgarian Muslim believer waits for Friday prayer at the yard of the city's mosque in the town of Kardzali, Bulgaria. Photo by EPA/BGNES

Police in rural southern Bulgaria have raided the houses of what they suspect is a branch of an outlawed Islamist group, provoking a peaceful protest in a Muslim village, the interior ministry and media reported.

Officers on Wednesday (6 October) searched houses and offices allegedly used by followers of al Waqf al Islami, a radical Islamist group once based in Eindhoven, the Netherlands, and banned there after the 9/11 attacks in the US in 2001, a ministry statement said.

In one of the locations of the operation, the south-western mountain village of Lazhnitsa, some 200 kilometres south of Sofia, residents surrounded the house of their local imam Mohamed Kamber for several hours and would not let national security agents confiscate his religious library.

There was no immediate announcement of arrests or clashes.

The raids covered villages in the districts of Blagoevgrad, Pazardzhik and Smolyan, which are the strongholds of Pomaks – Bulgarians forcefully converted to Islam in the XVII century by the Ottoman Empire. The vast majority of Bulgarians are Orthodox Christians. The Pomaks differ from the country's ethnic Turkish minority through their mother tongue which is Bulgarian.

Police seized "large amounts of propaganda material with radical content, preaching religious hatred and a change of the constitutionally established order", the ministry statement said as quoted by the daily Trud website. "Confiscated were financial documents demonstrating illegal funding of the activists and tax legislation offences on their behalf."

Police reinforcements were dispatched to the village to forestall clashes, the radio said. No violence was immediately reported but tension was building up and it took local officials several hours to persuade the crowd to disperse and let the agents carry away the seized material.

In Sofia, Chief Prosecutor Boris Velchev told reporters the police action had been planned for several months. He refused to comment on whether police had discovered so-called "sleeping terrorist cells".