Gorbachev in Bulgaria: Asia-Pacific to Be New Power 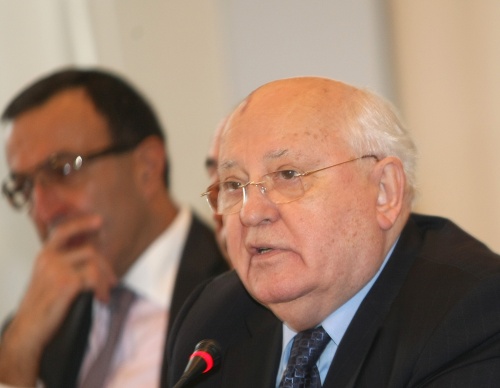 Mikhail Gorbachev, former Soviet Union leader, has assessed as "deeply symbolic" the fact that the conference "Europe Looks East" is organized in Bulgaria. Photo by BGNES

It is deeply symbolic that we have organized the conference in Bulgaria, said former Soviet Union leader Mikhail Gorbachev at the first day of the forum "Europe Looks East" in Sofia.

The two-day conference, which began Thursday. is organized by "New Policy Forum", an NGO founded by Gorbachev, and the Bulgarian "Slaviani Foundation" with President Zakhari Zakhariev.

The participants will discuss topics from modern politics, like the Turkish EU membership and the politics in the Middle East region.

"Here, at the border between civilizations, in one simultaneously European, Balkan and Slavic country, we will talk about Europe, about the countries, which have participated in the European processes for centuries," Gorbachev said.

"Today not all of these countries are EU member states, but that does not make them less European countries. Their historical destiny and culture, as well as their nations, belong to Europe. Without them, Europe would lose part of its richness and diversity," he said.

He noted that these non-EU member states are not neighbors of Europe, but rather an inseparable part of it.

"I would like to point that out because some people say that all the European countries have united in the European Union," Gorbachev said, adding he did not approve of this statement.

He reminded that 20 years ago, the end of the East-West opposition provided unique conditions for creating a united Europe.

"The European politicians did not take advantage of this chance as much as they should have. The main reason for that was the wrong assessment of the events, which led to the end of the Cold War and the fall of the totalitarian and authoritarian regime. And the assessment was that it was a victory of the West," Gorbachev said.

The former Soviet Union leader has explained that nowadays political analysts claim that the role of Europe on the world political scene is decreasing.

"America, Asia and Europe itself are talking about the setting in of the Asia-Pacific region. The center of the international politics and economy is redirecting to this fast developing part of our planet," Gorbachev said.

Former Bulgarian Foreign Minister, Solomon Passy, made a brief announcement, stating that inside or outside the EU, Turkey will be the new power of 21st century.