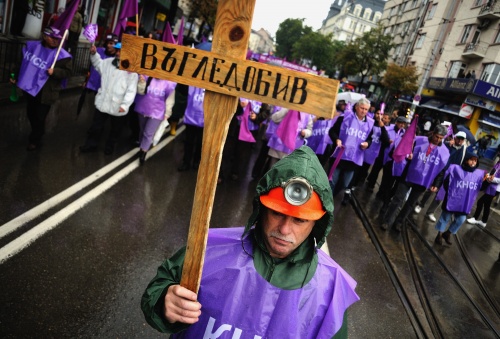 A supporter of Bulgarian Trade Unions holds a cross with text reading 'Mining' during a protest rally in Sofia , Bulgaria 07 October 2010. Photo by EPA/BGNES

The International Monetary Fund expects Bulgaria's economy to grow 0% in 2010 and 2% in 2011, facing a sluggish recovery from last year's crisis, says a report on the world economic outlook by the Washington-based lender.

Emerging Europe's growth is expected to be 3.7% in 2010 and 3.1% in 2011, but IMF says there are pronounced differences in economic prospects across the region, depending on the condition of public and private sector balance sheets and the extent to which macroeconomic policies can support the recovery.

"Growth in economies that experienced the mildest downturns (Poland), and others that faced the crisis with relatively strong household and bank balance sheets (Turkey), is projected to continue gaining strength, helped by the normalization of global trade and capital flows," the report says.

"However, those that had experienced unsustainable domestic booms (Bulgaria, Latvia) or have vulnerable private or public sector balance sheets (Hungary, Romania) are expected to recover more slowly," it adds.

The document points out that "credit growth is rising again in many emerging economies, with the exception of crisis-hit countries in eastern Europe".

IMF warns that "if unaddressed, renewed financial sector stress could spread—including to emerging Europe via trade and cross-border bank flows—and could have significant adverse effects on real activity".

Turkey and Poland are powering ahead among countries in the emerging regions with growth rates of 7.8% and 3.4% respectively, having avoided the worst of the 2008 financial crisis.

The eurozone is now expected to grow 1.7% in 2010, revised up by 0.7% from the IMF's July forecast, largely because of Germany's resurgence.

Bulgaria, the European Union's poorest country is currently going through its first recession in 12 years after a three-year lending boom stalled and foreign investments dried up.

At the beginning of October the International Monetary Fund wrapped up its two-week review and projected Bulgaria's economy to grow from 0% to 0.4% in 2010. It said this year's inflation will be moderate, while the current account deficit is expected to fall below 3% of gross domestic product.

'Bulgaria is benefiting from stronger exports and the economy is poised to stage a gradual recovery,' the IMF said in a statement.

'Recouping the shortfall in tax collection seen through August by the year end will be challenging and shortfalls may occur. Safeguarding the 2010 deficit target will therefore require strong spending control,' the Fund said.

Earlier this year, the government adopted a package of austerity measures, freezing public pays and pensions in a bid to reduce the bloating deficit.

It revised up to 1% its economic growth forecast for this year, pinning its hopes on increasing exports.