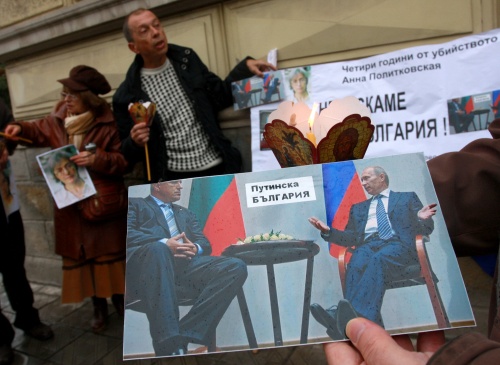 "Putin's Bulgaria" - reads the inscription on the photo of the meeting of Borisov and Putin carried by the NGO remmebering Anna Politkovskaya. Photo by BGNES

Representatives of a Bulgarian NGO rallied in Sofia to support free speech and remember Russian journalist Anna Politkovskaya four years after she was murdered.

"We don't want a Putin's Bulgaria," declared the protesters from the "Free Speech Association "Anna Politkovskaya," a Sofia-based NGO at their rally in memory of the Russian journalist in front of the "House of Moscow in Sofia."

Their slogan is a word play with the title of Politkovskaya's book "Putin's Russia."

They carried a photo of the meeting of Bulgarian Prime Minister Boyko Borisov's only meeting with Russian Prime Minister Vladimir Putin. The rally coincided with the 58th birthday of Putin, to whom Borisov sent a special telegram.

The protesters, however, went beyond their calls for freedom of speech and for remembering the work of Politkovskaya; they expressed their opposition to Bulgaria's participation in three large-scale energy projects together with Russia – the Belene NPP, the South Stream pipeline, and the Burgas-Alexandroupolis pipeline.

"I don't think that there are free media in Bulgaria because each media has its owners. We are a destroyed democracy. And it doesn't matter if which journalist is serving what interests, the freedom of speech must not be targeted with murders," said Nikolay Govedarov from the association.

Anna Politkovskaya, journalist from Novaya Gazeta, was shot dead in Moscow on October 7, 2010. Nobody has been convicted for her assassination yet, and the investigation does not appear to be even close. Three suspects have been arrested and released for lack of evidence.