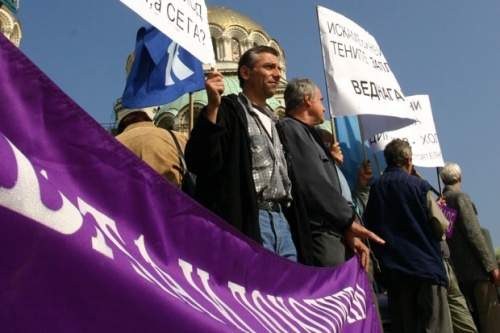 About 15 000 people are expected to attend the rally against the retirement reform, staged by the Bulgarian KNSB labor union. File photo

The Bulgarian labor union KNSB is organizing Thursday a protest rally against the cabinet's silence regarding intentions to increase the years of service required for retirement.

On Tuesday, the labor unions reached a verbal agreement with Prime Minister, Boyko Borisov, to up by 3% employers' social security payments and to withdraw the Bill for amending the Social Security Code.

KNSB decided to not cancel the Thursday rally regardless of the agreement because they do not yet have Borisov's signature on the retirement age and years of service.

About 15 000 people, working in the mining industry, health care, transport, farming, State Administration, the police, steel makers, retirees and disabled, are expected to attend the rally and call for the PM to put his signature under his commitments to stabilize the social security system.

The KNSB leaders vow to continue protests until the signature is received and the increase of the number of years required for retirement is taken off from the Bill. They blame Finance Minister, Simeon Djankov, for the delay.

The march will go through downtown Sofia and starts at 11:30 am.

Meanwhile, Istv?n Sz?kely, who leads the official delegation of the European Commission visiting Bulgaria stated the cabinet must not back off from the retirement reform because it is one of the most crucial ones and upping social security payments by 3% should not be used as an excuse to not increase the years of service required for retirement.