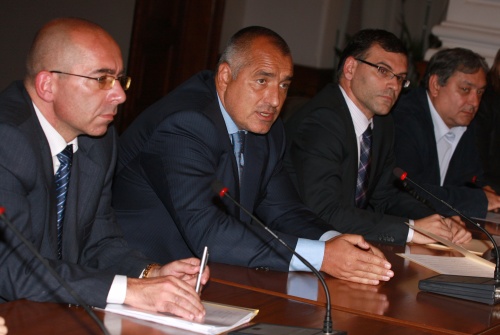 From left to right: new Health Minister, Stefan Konstantinov, Prime Minister, Boyko Borisov, Finance Minister, Simeon Djankov, and the President of the Doctors Union, Tsvetan Raychinov, during talks on the agreement between the cabinet and the Union. Phot

The agreement guarantees health insurance contributions will be used only for health care and not to fill other budget gaps.

The talks between the cabinet and the President of the Doctors Union, Tsvetan Raychinov, lasted over an hour and a half, but led to consensus.

On Tuesday, Borisov vowed before physicians the health insurance payments would not go down and the entire 8% from the wages going to health insurance would be used only for treatment. Until now 2% were deposited in the reserve of the National Health Insurance Fund (NZOK).

On October 11, instead of protests the Union would organize information campaigns across the country, among doctors and patients, to make them aware of the details of the signed agreement, Raychinov reports.

Borisov further promised the hospitals would receive all overdue amounts owed to them by NZOK since the beginning of the year.