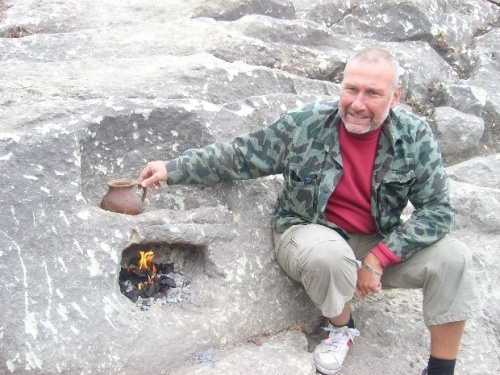 Bulgarian archaeologist Nikolay Ovcharov demonstrates how the ancient rock stove that he found at Perperikon works. Photo by Darik News

On Tuesday, Ovcharov presented his latest intriguing discovery an ancient cooking stove cut right into the stones of the rock city dated back to 3rd-4th century.

The stove consists of a lower part, a hearth, whose ceiling has two holes that let through some fire; the ceramic cooking vessels would be placed on top of the holes.

"We can easily call this discovery a prototype of the contemporary cooking stoves," Ovcharov said.

The archaeologist made a recapitulation of his four months of excavations over the summer, during which his team examined 100 meters of the fortress wall of Perperikon.

The 3-meter-thick wall is taken to mean that Perperikon was the strongest fortress in the Rhodope Mountain from the Roman period (in this case, the second half of the 3rd century AD).

The stronghold protected what is believed to have been a palace-sanctuary harboring the ancient temple of Dionysus.

Professor Ovcharov, also known as the "Bulgarian Indiana Jones", believes that Perperikon was a religious center in Thracian and Roman times but was also a crucial city controlling the mining of gold in the Rhodope Mountain.

The numerous artifacts and objects unearthed by him over the summer include a Roma lamp with the image of a naked dancer, bronze and silver ornaments, lead seals of local rulers, including the Byzantine patrician Teodorokan, two rock tombs, and an image of a mummer (known in Bulgaria as "kukeri" dated to the 13th century.