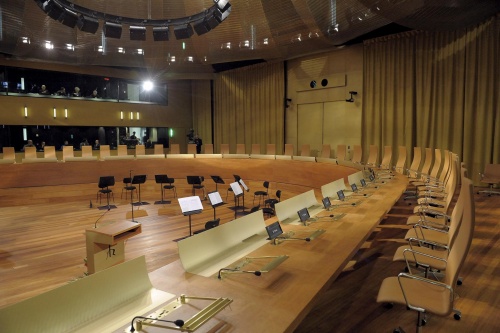 A general view of the interior prior to the official inauguration of the new building of European Court of Justice in Luxembourg. Photo by BGNES

The Bulgarian National Health Insurance Fund (NZOK) must pay for treatments of Bulgarian citizens abroad if they cannot receive such treatment in the country at all or on time, depending on the ailment.

The rule belongs to the European Court of Justice in Luxembourg and relates to the case of Bulgarian, Georgi Elchinov, from the southern city of Blagoevgrad, who has been trying for 3 years now to receive reimbursement for a surgery in Germany.

The Court's decisions are mandatory for all similar institutions with similar cases across the EU.

The magistrates state that even if an individual left to seek treatment abroad before having the green light from NZOK, the money is owed to that individual and a Bulgarian court must now reinforce the rule.

A permission cannot be denied to someone to be treated abroad when Bulgaria cannot provide timely and/or alternative cure, the Court says.

NZOK's management has declined Tuesday comments for the Bulgarian daily "Dnevnik" because they have not received the official court papers yet.

Georgi Elchinov, 58, has been diagnosed in 2007 with a form of cancer on his right eye and was told he mus have the eye removed. The man, however, learned that German surgeons do a procedure, placing radioactive plates inside the eye that could save it. He applied with NZOK to be allowed treatment abroad, but since the case has been urgent and the answer took a long time, Elchinov left for Berlin to only learn later payment for the surgery has been denied.