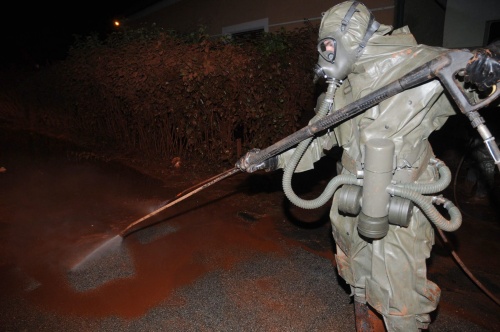 A Hungarian soldier wearing a chemical protection gear cleans a street from the red, toxic mud flood from the damaged reservoir of a nearby Ajka alumina factory in Devecser, 167 km southwest of Budapest, Hungary. Photo by EPA/BGNES

Bulgaria, Romania, Serbia and Ukraine might be affected by the deadly sludge escape from an alumina plant, which killed four people and injured 120 more in Western Hungary.

On Monday, about 600,000-700,000 cu m of chemical sludge escaped from the Ajkai Timfoldgyar plant, when a reservoir broke and flooded some villages with toxic red mud.

The sludge is said to contain caustic material and to be toxic if ingested, the BBC has reported.

According to Hungarian media, the sludge might reach the waters of the Danube River. If that happens, Bulgaria, Romania, Serbia and Ukraine would be under threat of pollution.

Troops in protected gear have been helping clean up the spill. Teams for chemical protection, firefighters and soldiers have been evacuating the area of the accident.

390 residents had to be temporarily relocated and 110 had to be rescued from the flooded villages.

Two children, aged 1 and 3, were among the victims. Rescue workers are looking for seven people who are still missing.