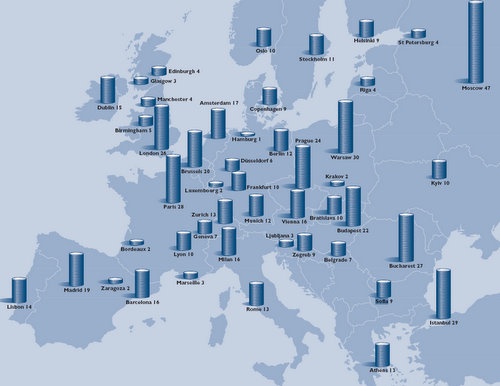 Cities in Central and Eastern Europe are to attract the largest number of expansions by top European companies in the next 5 years. Map by Cushman and Wakefield

A total of 9 out of the 500 "most influential" European companies have indicated they will locate branches in Bulgaria's capital Sofia, according to a study of consultancy Cushman & Wakefield.

The study, which was presented in Bulgaria by Forton International, a local partner of Cushman & Wakefield, had found that Moscow will be the most attractive European city with 47 companies saying they will expand there.

"The countries from Central and Eastern Europe offer extremely good opportunities to European companies. The favorable factors include the cheaper labor costs and good tax policies as well as the good locations of the cities where the large companies want to locate their business. In this respect, Bulgaria has its competitive advantages," said Sergey Koynov, CEO of Forton International.

The Cushman & Wakefield study has found that London, Paris, and Frankfurt are the three top European cities for business. Germany has four cities in the top ten, together with Duesseldorf, Munich, and Berlin.

Shanghai is the global city to which the largest number of top European companies, 30, plan to expand in the period 2010-2015.