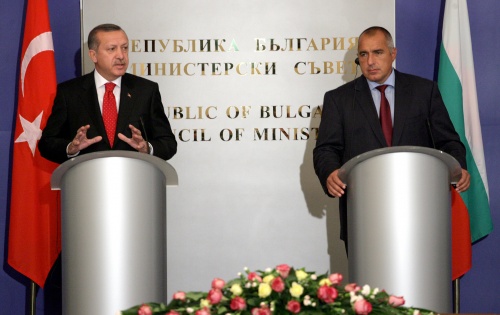 Prime Minister Erdogan of Turkey (left) and Borisov of Bulgaria (right) expressed much mutual understanding and agreement after their meeting in Sofia. Photo by BGNES

The Prime Ministers of Bulgaria and Turkey, Boyko Borisov and Recep Tayyip Erdogan, have demonstrated cordial relations and mutual understanding on all major points of bilateral relations.

Their showing of closeness appears to be significant after the Bulgarian PM recently snubbed Turkish President Abdullah Gul at a Balkan leaders' dinner organized by Turkey in New York City, allegedly because the Turkish hosts sought to demonstrate their country's political and economic weight.

"Turkey has always felt Bulgaria close to itself. The geography that we share has a substantial impact on our relations. Together with Prime Minister Borisov we have reviewed and assessed all aspects of our bilateral relations," Turkish PM Erdogan declared during his joint press conference with Borisov in Sofia.

Erdogan emphasized the problem with the current Chief Mufti in Bulgaria. The issue has been in place since the spring when the Bulgarian court restored to this post Nedim Gendzhev in the place of the popularly elected Mustafa Hadzhi, a decision widely protested by the Bulgarian Muslim community, which consists of ethnic Bulgarian Muslims, ethnic Turks, and immigrants from the Arab world.

The Prime Minister of Turkey expressed hopes that the issue will be resolved soon based on democratic principles, which should calm down the Muslims in Bulgaria.

Erdogan explicitly underscored that the Chief Mufti issue is vied by Turkey as a domestic Bulgarian affair, which led Borisov to thank him for the understanding and for not trying to intervene in any way.

The two PMs stressed the importance of the Nabucco gas transit pipeline and of the construction of the Bulgaria-Turkey gas pipeline connection. According to Bulgarian Economy Minister Traikov, this 76 km pipe should be ready by 2014, and should actually become the first operational section of Nabucco. Both projects have been stressed because of the importance of diversification of energy sources and routes.

Bulgarian nationalists have been raising the issues in the past months. While the major nationalist party Ataka, which is the staunchest ally of the ruling party GERB in Parliament, has toned down its anti-"Turkey in the EU" rhetoric that it voiced in the past, another nationalist formation, VMRO, has gathered 330 000 signatures to demand a referendum on the issue. Under Bulgarian legislation, if a referendum cause is backed by 500 000, a referendum must be called, while if the signatures are more than 200 000 but less than 500 000, the Parliament is obliged to hold a debate and a vote on whether to schedule a referendum.

"The issue about the referendum on Turkey's EU accession will be on the agenda when Turkey completes its EU accession negotiations," Borisov said.

Erdogan in turn complained that Turkey has not been treated fairly by Brussels compared to the way other candidate countries have been treated in the past and in the present.

"Turkey is constantly being delayed in this process and that is not a good thing. We have opened several negotiation chapters but we have not closed a single one. Yet, we are working patiently and learning our lessons, and we hope to complete this process successfully," Turkey's PM stated.

He did point out that the cultural cooperation between Bulgaria and Turkey is crucial, and that it focuses on restoring Bulgarian historical objects in Turkey, and Ottoman monuments in Bulgaria. He reminded that when he was the Mayor of Istanbul, he supported and realized the repair of the Bulgarian church St. Stefan (opened 1849).

With respect to another issue which might be potentially problematic in the Bulgarian-Turkish relations – the compensations by Turkey for Bulgarians who fled its Eastern Thrace (European Turkey) amidst repressions in the 1910s and 1920s – Erdogan also demonstrated good will.

Claims by Bulgarian descendants of the Eastern Thrace refugees have to do with the properties that their ancestors left behind in Turkey when fleeing; under the Ankara Treaty of 1925 between Bulgaria and Turkey, the latter commits to compensating the refugees. Today's estimates say Turkey should be owing Bulgarian citizens up to EUR 10 B.

The issue has been raised especially by Bulgaria's Diaspora Minister Bozhidar Dimitrov. In December 2009, Dimitrov even suggested Bulgaria should veto Turkey's EU accession unless the compensations issue was not settled – which led Prime Minister Borisov to scold him publicly and to deny any such moves.

"Wherever the claims are legally founded, we are going to satisfy them," Erdogan said in Sofia Monday. In turn, Borisov said he had many times urged all Bulgarian citizens with claims on properties their ancestors left behind in Turkey to provide all documents available to the Bulgarian state so that diplomatic action can follow up; however, no such documents have been turned in to date.