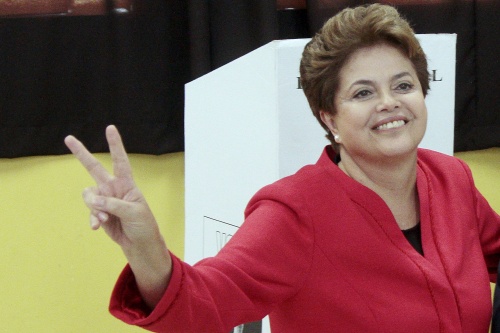 Bulgaria-descended Dilma Rousseff from the Workers' Party has won the first round of Brazil's presidential elections but has fallen short of the 50% plus 1 vote needed to evade a runoff.

With almost 100% of the votes counted, Rousseff has received 46.6% in the first round of Brazil's presidential elections, Brazil's Supreme Electoral Court announced.

Her main rival Social-Democrat Jose Serra has 32.7%, while Marina Silva from the Green Party, who is believed to have “stolen” votes mostly from Rousseff, is third with 19.5%.

A total of 17.9% of the cast votes have been annulled. About 101 million of the 136 million eligible voters have cast their votes.

The only exit poll carried out by Ibope and announced by GloboNews TV had predicted a first-round win for Rousseff with 51%; its statistical mistake was within 2%.

To nail the Brazilian presidency in the first round, the 62-year-old Rousseff needed 50% plus 1 vote. Having fallen just short of that, she will have to face Serra in the runoff on October 31, 2010. On Sunday, Brazil also voted for members of the legislature and governors.

Brazil's outgoing President Luiz Inacio Lula da Silva himself won both of his terms in the elections in 2002 and 2006 after second-round runoffs. Prior to that Lula ran in every presidential elections since democracy was restored in Brazil in 1985.

A total of nine candidates ran for the presidency of Brazil, with other frontrunners including Marina Silva from the Green Party and Plinio de Arruda Sampaio from the Socialism and Freedom Party.

Dilma Rousseff's popularity is reported to have declined slightly after peaking at 57% two weeks ago, as a result of a media revelations of alleged influence peddling by family members of Erenice Guerra, Rousseff’s successor as Lula’s cabinet chief. Guerra resigned her post to defend herself against the accusations, which she said were unfounded.

Rousseff, who has never held an elected office before, has herself acknowledged that her popularity is primarily the result of her promotion by extremely popular president Lula da Silva, whose two terms in office turned Brazil into a world-scale economic powerhouse.

Lula’s former cabinet chief Dilma Rousseff, who would be Brazil’s first female president, has vowed to maintain the social programs and the economic growth that has lifted 21 million people out of poverty since 2003, and has created 15 million new jobs. The Brazilian economy is expected to grow by 7.53% this year, the most since 1985, according to a recent central bank survey.

Until she was tapped by Lula da Silva, Rousseff was the president's little-known Energy Minister and, later, his Chief of Staff. She is also known for being a former Marxist guerrilla, surviving torture in the hands of the military dictatorship in Brazil more than three decades ago.

Rousseff's father, Petar Rusev, also know as Pedro Rousseff, was a Bulgarian leftist who emigrated to France in 1929, and then left for Latin America in the 1944.