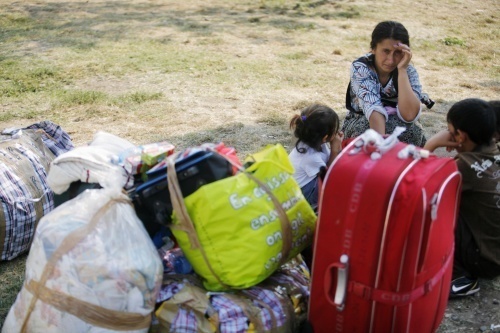 Romanian gypsies sit next to their luggage shortly after arriving from France at the international airport in Bucharest, Romania. Photo by EPA/BGNES

The French Immigration Ministry begins fingerprinting the Roma receiving financial assistance from the State after being deported, BBC reports

Starting Friday, biometric records will be created on Roma who receive EUR 300 euros when they agree to leave France.

Most of the Roma in France are going back to their home countries of Bulgaria and Romania.

French authorities are undertaking the measure in order to prevent some of the expelled Roma to coma back to France several times and get multiple benefits for agreeing to be deported.

Data shows that last year 15 200 State assistance payments of EUR 300 euros per adult and EUR 150 per child were made to immigrants, mostly Roma, who agreed to leave France for the total cost of EUR 9 M.

The French government lists the majority as "volunteers", instead of deportees, but there are growing suspicions in the country that some of the Roma flown to eastern Europe have used the cash to come back under false identities.

The French government hopes taking a biometric record of everyone who is expelled will cut back on fraud.

The decision to fingerprint the Roma has led to concerns by human rights groups, who already accuse the French government of targeting a minority group all while France was warned by the EC earlier this week that it will face disciplinary proceedings and possible court action for its Roma policy.

President Sarkozy insists his country has every right to expel foreign Roma who are living in France without a job or any means to support themselves.