Bulgarian Doctors: Protest Is Still On 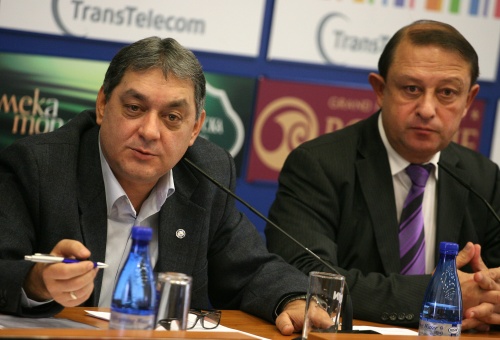 The Head of the Bulgarian Doctors Union, Tsvetan Raychinov (L), and the Chief Secretary of the Union, Dimitar Lenkov (R). Photo by BGNES

The Bulgarian Doctors Union has announced they stand firm behind their decision to organize a country-wide protest rally of doctors on October 15.

"Appointing one of the Deputy Heads of the Union as Health Minister was the decision of Prime Minister Boyko Borisov, it was not our suggestion," said Tsvetan Raychinov, Head of the Union, referring to the appointment of Stefan Konstantinov who was nominated to replace Anna-Maria Borisov, who resigned on Wednesday.

He added that next week doctors will make a final decision whether to protest or not, but the preparation has not been canceled.

"The additional BGN 65 M that Finance Minister Simeon Djankov promised to give is not enough. We demand to be immediately given the BGN 125 that the National Health Insurance Fund (NZOK) owes to the hospitals," representatives of the Union told the Bulgarian daily "Dnevnik."

Earlier, Raychinov stated that the planned protest could be canceled if the hospitals receive at least half of the BGN 125 M that NZOK owed them.

However, even though Djankov promised to give BGN 65 M, the Chief Secretary of the Union, Dimitar Lenkov, has announced that doctors still demanded the resignation of the Finance Minister.

The Bulgarian Doctors Union has also approached Bulgaria's chief prosecutor Boris Velchev over BGN 319 M, which according to the doctors were missing from the budget of NZOK for 2009.

They have been stating since January that the sum was used by the Finance Ministry for paying pensions in the end of 2009.

"We asked many times the Finance and Health Ministry and NZOK where the money was but we never received a satisfying answer," doctors claim.

However, the Director of NZOK, Neli Nesheva, has stated that the money was not missing. She explained that when there is remaining money from the operating reserve of the fund, they are transferred to the large reserve of the institution, which is part of the state's fiscal reserve, meaning the BGN 319 M was in the Bulgarian National Bank.

For two years, the finance ministers are entitled to solely dispose the money from the large reserve, which makes doctors believe that they money was used for activities, different than health care.