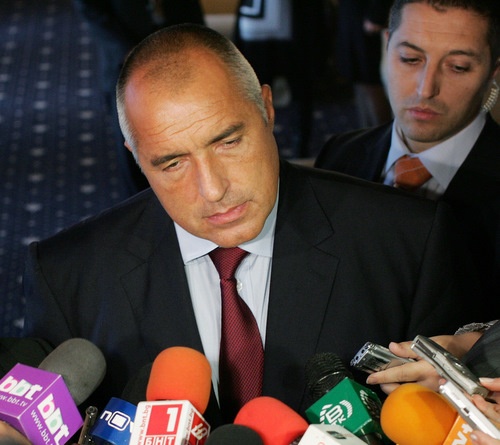 Bulgarian PM Borisov has set EUR 7 B as a maximum price for the Belene NPP. Photo by BGNES

Bulgaria's Prime Minister Boyko Borisov hinted he has asked Russian company Atomstroyexport to build the Belene Nuclear Power Plant for not more than EUR 7 B.

Borisov has confirmed a recent statement of Sergey Kirienko, the CEO of the Russian state company Rosatom, which is the parent company of Atomstroyexport, that the construction of Bulgaria's second NPP at Belene should be resumed soon thanks to an agreement with the Bulgarian government.

The statements by Borisov and Kirienko have come right before Bulgaria's preliminary construction contract with Atomstroyexport expires on September 30, 2010; the contract clauses provide for the re-adjustment of the price and deadlines based on inflation and other factors.

"The problem with Belene is the price. I have sent the Russians an offer about a maximum price for the construction, and we will go ahead with the project if they agree on it. What is more, within a month we will be announcing the strategic European investors interested in the Belene Nuclear Plant," the PM said in an interview for private cable TV "Kanal 3".

Subsequently, Rosatom offered Bulgaria a loan of EUR 2 B so that the construction can continue, in exchange for a stake in the future plant that the Bulgarian government could then buy out by returning the money. The offer was refused by the Borisov Cabinet which also made it clear it would construct the Belene plant only if an European (apparently meaning EU or Western European) strategic investor can be found.

The government has started a tender to select a consultant that is supposed to help it pick an investor; the project, which originally was supposed to be 51% owned by the Bulgarian state, is to be restructured based on the fact that the National Electric Company NEK has already spent BGN 1 B on Belene. Over the past months, the Borisov Cabinet made it clear it might agree on a 20-30% stake in the future plant.

The recent news about the Belene project included Serbia's interest to participate in its with a share of up to 5%, and the interest on part of the Chinese government, which, however, says that the use of Russian technology is an obstacle to the participation of Chinese investors.

Under Bulgaria's preliminary contract with Atomstroyexport signed in 2008, the construction of the Belene plant with two 1000-MW VVER nuclear reactors is supposed to cost EUR 3.997 B. However, the contract expires on Thursday, September 30, 2010, which means that all variables in it – including the adjustment of the price according to the inflation, the parameters for the delivery of equipment and construction and launch deadlines should already be negotiated.

Yet, Borisov made it clear he wanted no readjustments but offered Atomstroyexport a set price and firm deadline.

"I would like to reduce the price of the nuclear plant by EUR 700-800 M, down from over EUR 7 B," he explained hinting that EUR 7 B should be the maximum price the Bulgarian government is willing to pay. A few days earlier Economy Minister Traikov estimated the cost of the Belene plant at EUR 8-9 B.

Reports in the Bulgarian media say that the Russians would be glad to accept Borisov’s offer for setting a certain price for the construction as this would save them the negotiations about which inflation index should be used for the readjustment of the original price of EUR 4 B. Atomstroyexport’s offer to use the inflation rate in Russia has been flatly rejected by Bulgaria, and the issue of which inflation index of Eurostat should be used has been up in the air.

PM Borisov has explained that Bulgaria should stick with the Russian technology for Belene precisely because its only existing NPP Kozloduy is using Russian reactors.

“We are going to turn the Belene NPP into an European project. This is very important because if we don’t do it, Turkey is constructing four reactors, and in 10 or 20 years we will be importing electricity from Turkey, not the other way around. Because the only operation reactors of Kozloduy, 5 and 6, expire in 2020. But if we built reactors 1 and 2 at Belene with the Russians, we will be able to extend the life of the Kozloduy reactors. Because only the Russians have the right to do that. Thus, we will also have four reactors in 2020, just like Turkey. So I am actually doing something good for Bulgaria contrary to all accusations that I am serving somebody else’s interest,” Borisov stated.

The license of Unit 5 of Kozloduy expires in October 2017, and of Unit 6 – in October 2019. According to Bulgaria’s Minister of Economy, Energy and Tourism Traicho Traikov, the government has already prepared a plan for extending their life.

Technically, the life of the Bulgarian reactors can be extended only by the Nuclear Regulatory Agency based on the execution of a modernization program.