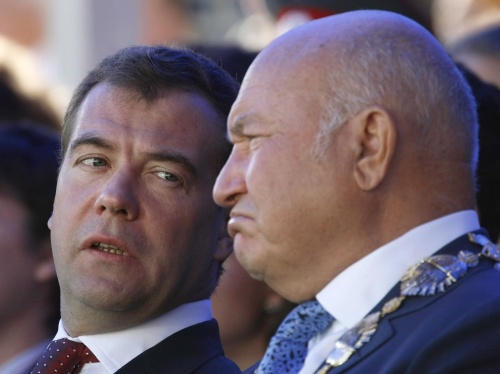 Russian President Medvedev (L) fired Moscow's mayor Yuri Luzhkov (R) who governed the capital for 18 years and was one of the most powerful politicians in the country. Photo by EPA/BGNES

The BBC has reported that the presidential press service has stated that Luzhkov was fired because of disagreements with Medvedev.

"[He was dismissed] because he has lost the trust of the president of the Russian Federation," the Russian news agency ITAR-TASS has reported.

The announcement came after weeks of speculation that Luzhkov would be forced out. He has recently been criticized by a state-run TV channel for the capital's roads and for bulldozing of historical buildings.

According to the BBC, the mayor and his wife have also been accused of corruption. However, Luzhkov denounced the claims as "total rubbish", designed to make him "lose control."

The Moscow mayor, who was in office since 1992, has been replaced by his first deputy, Vladimir Resin.