Bulgarian Universities Forced to Close Down over Winter 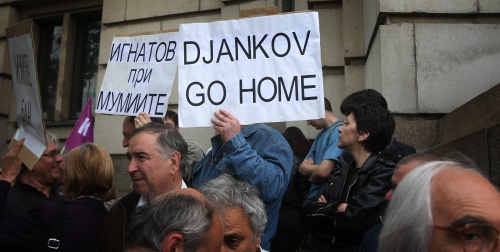 Faculty and students from Sofia University organized a protest in May against drastic cuts in state funding for education. Photo by BGNES

A number of leading Bulgarian universities will be forced to substantially extend their winter breaks in an effort to cut spending in the wake of drastically decreased state support.

Prof. Anastas Gerdzhikov, vice-rector of Sofia University, Bulgaria's oldest and more prestigious institution of higher education, stated Monday that the University is considering closing doors at least for January in an effort to cut on expenses such as heating, electricity and others.

No final decision has been taken yet, but information released suggests that the Sofia University is not certain about it capacity to fund operations even for November and December.

State funding for universities has been cut up to 40% for 2010 following austerity measures taken up by Minister of Finance Simeon Djankov. This has resulted in Bulgaria severely lagging behind EU standards in state support for science and research. The same amount of state spending for education and science is previewed for budget 2011.

Sofia University has also complained of a delay in payment of due funds from the state budget on research projects.