Dilma Rousseff: I Feel Like I Am Partly Bulgarian 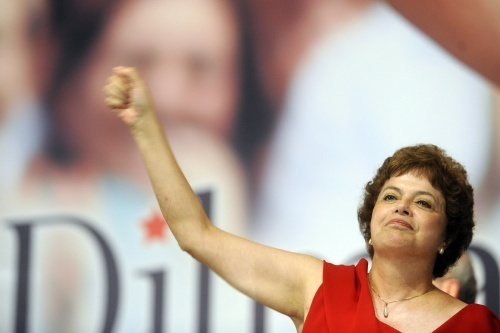 Asked whether Bulgarians can expect her to pay a visit to the country, Dilma Rousseff said there was no doubt about that. Photo by EPA/BGNES

Less than a week before Brazilians go to the polls, Dilma Rousseff, the presidential candidate of Bulgarian origin, has made an emotional confession about the land of her father.

"I feel tenderness and love for Bulgaria. And I can even say that to a certain extent I do feel like I am Bulgarian, even though I have never been in the country where my father was born. My father died when I was only fifteen years old and I did not have the chance to learn Bulgarian," Dilma Rousseff said in an interview for 24 Hours daily.

Asked whether Bulgarians can expect her to pay a visit to the country, Dilma Rousseff said there was no doubt about that.

"My relatives in Bulgaria should expect my visit shortly. I am looking forward to finally meeting them."

The candidate of the ruling Brazilian Workers Party is expected to win the majority of votes she needs in the elections on October 3 and avoid a run-off vote.

"My very nomination for president speaks of a shift in Brazilians' attitude towards discrimination. Should I be elected, I will put in even more efforts in combating this dangerous phenomenon," she said.

Brazil is one of several emerging world powers pressing the United Nations for an expansion of permanent seats on the Security Council. Asked whether she would succeed in this in her capacity of head of state, Dilma Rousseff said:

"I pray to God that I succeed. This would be a real recognition for the grandness of Brazil."

Dilma Rousseff was born in Brazil on December 18, 1947. The daughter of a Bulgarian immigrant lawyer and a Brazilian mother, Rousseff was raised in an upper-middle class household in the Southeastern city of Belo Horizonte. She has a degree in economics.

Rousseff has been da Silva's Chief of Staff since 2005 while the position is considered equal to the one of a Prime Minister since Brazil doesn't have a Premier.

She was promoted as Chief of Staff after her predecessor resigned amidst accusations of vote buying. At the time she was Brazil's Energy Minister.

Rousseff quickly proved her leadership abilities; she is credited of helping the President to carry out his social programs for assistance to the poor along with providing effective control over infrastructure projects for billions of USD.

The front-runner is running on promises for more flexible labor market and labor unions' laws along with a plan to reform the retirement system, and the pay scales such as introducing bonuses based on performance.

In Bulgaria dailies, magazines, broadcasting and television stations are closely following the Brazilian presidential electoral campaign and many journalist are ready to cover the event in situ next October 3 when the Bulgarian descendent could be chosen to rule over the world's seventh largest economy.

The country is said to have been trapped by a "Dilma fever" given the almost certain victory of the Brazilian ruling party's presidential candidate Dilma Rousseff whose family came from Bulgaria.