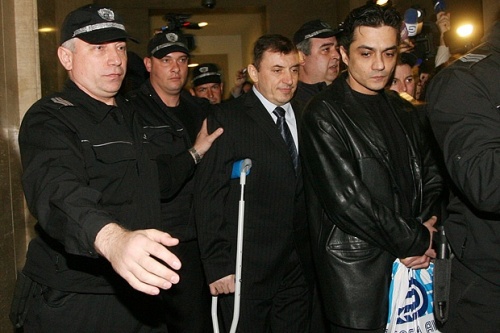 Aleksei Petrov (center) was arrested in the middle of February on charges of money laundering, racketeering, drug trafficking, bribery and tax fraud. Photo b

The former undercover agent of Bulgaria's State Agency for National Security (DANS), Aleksei Petrov, who is charged with a number of crimes, will take the witness stand in another high-profile case.

The Sofia City Court ruled Monday to call Petrov to testify in the 10-year-old murder of the lawyer from the city of Yambol, Nadezhda Georgieva, over the fact she has worked since October 1999 until her death at the swimming complex "Spartak" in Sofia, owned by the ex agent.

Petrov's testimony was requested by the attorney for Georgieva's parents. He will be asked if he was informed about the murder before the police and how exactly he has received the information. According to the attorney, evidence went missing from the case mysteriously in a move that cannot be attributed to recklessness.

Nadezhda Georgieva was found dead in her Sofia apartment at the end of February 2000. What followed has been described by local Bulgarian media as one of the most mysterious cases during the past 10 years.

The name of former Chief Prosecutor Nikola Filchev was tangled in the case and Prosecutor Nikola Kolev even hinted of a possible connection between Filchev and Georgieva's murder with Filchev perpetrating the actual assassination. Kolev, himself, was killed in 2002.

Then in 2006 Bulgarian investigator, Iliya Iliev, died of a heart attack while waiting in front of the current Chief Prosecutor Boris Velchev's office. Iliev was reportedly meeting Velchev to give information about Georgieva's case, but passed away before he could share any facts.

The three defendants are Orlin Avramov, Plamen Kalaydzhiev and his wife Dimitrinka, who is currently living in the United Kingdom. The case has been dragging on mostly because it was suspended twice in 2008 over the non-appearance of Dimitrinka and the 2009 refusal of a UK judge to extradite her.

Aleksei Petrov, one of the most controversial and mysterious figures of the country's transition, was arrested on February 10, 2010, during the special police operation codenamed "Octopus," on charges of blackmail, racket, prostitution, illegal drug trading, draining of the "Kremikovzi" steel mill, trading in influence, money laundering, and tax evasion, among others.

On September 8, the lower instance - the Sofia City Court, ruled to keep Petrov behind bars. During the session, the defense council announced the prosecutor has already lifted a number of charges against their client such as organizing a prostitution ring, the draining of the steel mill, money laundering among others and the sole charge still standing was for organizing a crime group dealing with racket and blackmail.

The Prosecutor's Office first declined any comments, then firmly rejected the claims of the attorneys saying Petrov is still charged as the ringleader of a large-scale crime group, but the case was divided in two separate ones.

In mid-September, the Sofia Appellate Court while deciding on Petrov's to be released from jail, declared that the division of the case violates the law and the Prosecutor's Office of Appeals ruled to unite the two files once again.