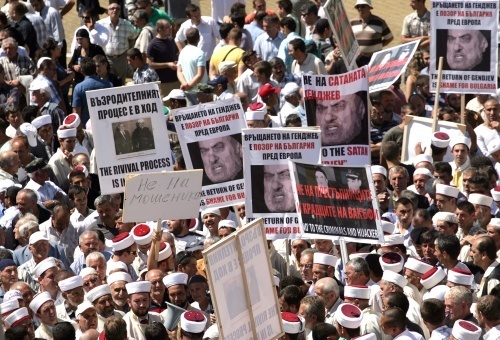 Bulgarian Muslims have organized many protests against the court ruling allowing the reinstatement of former Chief Mufti Nedim Gendzhev. Phot by BGNES

The deputy head of the Bulgarian ethnic Turkish party DPS and the chair of the Parliamentary Assembly of the Council of Europe (PACE) have discussed the situation with the appointment of a Chief Mufti of the Bulgarian Muslims.

Yunal Lyutfi and the PACE President, Mevlut Cavusoglu, have met in Ankara, where the latter was introduced to the concerns of DPS and the Bulgarian Muslims about the court ruling that allows the reinstatement of former Chief Mufti Nedim Gendzhev, who appears to be resented by many Muslims in Bulgaria because of his alleged involvement in controversial practices.

Lyutfi has given Cavusoglu a letter from the Bulgarian Muslims, in which they state their outrage and insist that the problem be solved soon and in compliance with their demands.

The PACE President has stated that he was informed about the problems, which the Bulgarian Muslim community faces, and that he would follow closely the development of the issue.

The Bulgarian Muslim community has been agitated since the Supreme Court of Cassations confirmed the ruling of the Sofia Appellate Court, which allows the reinstatement of Gendzhev.

The ruling has announced as invalid the decision of the National Muslim Conference from 2008, during which Mustafa Alish Hadzhi was elected as a Chief Mufti.

The Bulgarian ethnic Turkish party DPS has already announced it will approach the EU Justice Commissioner Viviane Reding and PACE on the issue.

The issue was also discussed between the Bulgarian Foreign Minister Nikolay Mladenov and his Turkish counterpart Ahmet Devutoglu on Friday.

Earlier, Bulgaria Muslims met with the Bulgarian chief prosecutor Boris Velchev and asked him to help make the conference that announced Mustafa Alish Hadzhi as the Chief Mufti legal before the court.

The Bulgarian PM Boyko Borisov has already announced that the state will not take sides in the arguments.