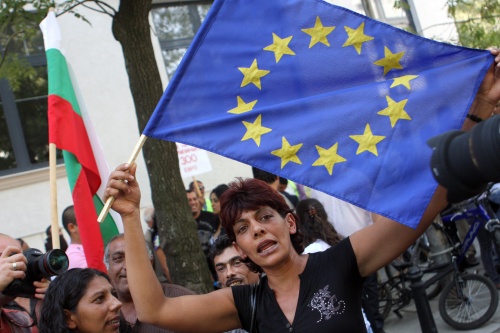 Some 150 people rallied in Sofia on Saturday in protest against what they described as the lack of punishment for crimes committed by ethnic Roma.

The procession organized by the nationalist "Bulgarian National Union" and "Civic Initiative 'Equal Rights and Responsibilities".

In addition overtly nationalist extremists, however, the rally appeared to have attracted some genuinely disgruntled regular citizens demanding justice against the "raids" of "Roma gangs" in the Bulgarian provinces.

The organizers accused human rights and Roma rights organizations of defending the "atrocities of Roma terror," and demanded the resignation of Interior Minister Tsvetan Tsvetanov for failing to crack down on Roma crimes.

"The French Ambassador and all diplomats who want to integrate the Roma should take them in their embassies," shouted the protesters.

"Bulgaria is not free because it has been terrorized by gypsies for the last twenty years. Go to the Bulgarian villages, and you will see that the elderly Bulgarians are trembling in fear every night. The people are being terrorized. We have not gathered because of hate but because we are sick of the Roma injustices. Check out the crime news. The state must assume its role and to apply the laws to everybody. Because at present the gypsies are privileged. They are allowed to commit crimes without any punishment. There will be more rallies and probably civil disobedience until it lasts," the organizers declared.