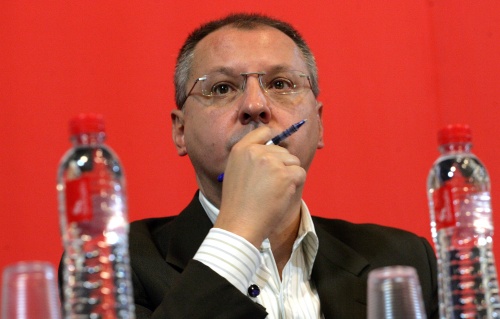 Socialist leader Sergey Stanishev has supported the 2020 strategy calling for the abolition of the flat corporate and income tax rates. Photo by BGNES

The Bulgarian Socialist Party adopted a controversial decision to go for the abolition of the flat tax rates after many of its leaders left Saturday's plenum in protest.

The National Council of the BSP got together in order to discuss its draft for an economic and social strategy entitled "Bulgaria 2020 – an European Welfare State."

The draft strategy authored by former Parliament Chair Georgi Pirinski was approved by the council but only after a bitter debate.

The document contains a proposal to do away with Bulgaria's 10% flat rate of income and corporate taxes introduced in 2008 by the Socialist-led government of Sergey Stanishev. The BSP leader Stanishev himself backed the idea in the draft – which is to abolish the flat tax within a couple of years if certain economic and administrative conditions become present.

Those are imagined to be the ability of state institutions to collect a high share of the due taxes, and Bulgaria starting to attract foreign investors with advantages different from the flat low tax rates.

A number of the members of the National Council of the Socialists, most notably Deputy Party Chair and head of the Sofia organization Rumen Ovcharov, slammed the draft strategy, and left the plenum.

Bulgaria's ex Prime Minister and party leader Stanishev, however, stood behind the document, which is supposed to provide guidance in the actions of the opposition party on economic and social policy for the next 10 years.

"We cannot accept the deceptive goal formulate by Finance Minister Djankov – quick accession to the ERM II in a time when the entire euro zone is shaking – because this will mean the collapse of entire governance systems in Bulgaria," Stanishev declared in his concluding remarks at the plenum slamming the center right government of Prime Minister Boyko Borisov and the GERB party.

"We, the Bulgarian Socialists, as part of the European family of Socialists, do not accept this model of the rightists in which the fiscal goals are goals in themselves instead of means. The fiscal fundamentalism of the rightists will destroy entire systems in Bulgaria – such as health care, education, scientific research," said the Socialist leader.

He backed the proposals in the document drafted by Pirinski – including the ideas for the restoration of the progressive tax rate because "most Bulgarians feel robbed, cheated by the post-communist transition."

"For me, this neoliberal fundamentalism which dominated the policies and philosophy of the Bulgarian transition of one of the causes of the many failures," Stanishev explained while also making it clear he regretted not having kept records of the meetings of the leaders of the three-way coalition whose government he presided in 2005-2009.

The center-left three-way coalition government included the Bulgarian Socialist Party, the National Movement for Stability and Prosperity of ex Tsar Simeon Saxe-Coburg and the ethnic Turkish party DPS (Movement for Rights and Freedoms), in which the 16 ministerial seats were apportioned in a 8:5:3 ratio.

The 10% flat corporate and income tax rates were the initiative of the NMSP and met rather fierce resistance on part of the Socialist Party even though they were eventually adopted.

Speaking on Saturday, however, Stanishev said that if he had had kept records of his meeting with coalition leaders Saxe-Coburg and DPS's Ahmed Dogan, he would be able to demonstrate the ferocity of the battle that he led in order to stand for the socialist ideals and commitments to the leftist voters.

Stanishev did point out that the 2020 welfare state strategy should not be viewed as a governance program, but, rather, as just a framework. He urged the Socialists not to accept the document as an assessment of his own government (2005-2009), apparently seeking to counter criticism by Ovcharov, who pointed out that the strategy technically denounced the results of the term of the Stanishev Cabinet by seeking to revise the flat tax measures.

The ex PM defended the existence and functioning of Bulgaria's currency board under which the lev is tied to the euro (initially to the deutsche mark upon the board's introduction in 1997).

The 2020 strategy drafted by Pirinski is reported to have originally included provisions for the termination of the currency board but those had been dropped as a result of the internal opposition in the party even before the document was put on discussion.

The BSP leader recognized that the currency board is the foundation of the financial stability of the country.

“The tax system cannot be a goal, it is a means, and at present it is one of Bulgaria’s competitive advantages because it has to compensate the weakness of its other systems. The flat tax must be removed when people can see that it is worth investing in Bulgaria not just because of the low taxes,” he elaborated while also making remarks about form of the ruling party.

“We are heading towards an authoritarian regime because the political party GERB cannot exist without the figure of Boyko Borisov,” Stanishev declared.